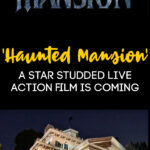 It has already been leaked that Rosario Dawson, LaKeith Stanfield, and Owen Wilson will be a part of this wicked fun new Haunted Mansion movie.

BUT, at this year’s D23 Expo, it was announced that there will be a plethora of stars peppering this live-action recreation of the famous Disney ride.

Check out this list of actors that are joining all the Grim Grinning Ghosts.

How freaking awesome is this movie going to be?!?

We haven’t seen this many stars together in one film since — maybe ever. Gah!

We don’t have a release date for the movie as of yet, but you KNOW we will keep you updated as soon as news drops.

You might remember the Eddie Murphy Disney’s Haunted Mansion movie from 2003. I’ll be the first to admit, it kinda sucked.

But, Disney has really gotten into a groove with recreating live action versions of their rides and movies.

Hello, the Pirates of the Caribbean franchise!!

I expect this new Haunted Mansion film will be just as fun, and I can’t freaking wait!