People Are Keeping Up Their Home Depot 12-Foot Skeleton and Decorating It For Every Holiday! 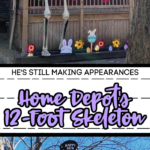 Last year we told you about Home Depot’s amazing 12-Foot Skeleton that they were selling for Halloween. It’s been many months and the Skeleton is still making appearances!

I mean he is absolutely magnificent on his own, but his holiday debuts have been hilarious! We need a bit more laughter and he bring’s it!

People have been decorating him for each holiday so that he continues making people laugh. Just check him out in this Christmas yard decor…

He even celebrated the New Year with some families! Can you imagine driving by and seeing this guy wishing you a happy new year?

And others brought him out to be a part of Valentine’s Day! Some people have even named him!

Benny is ready for Valentine’s Day!♥️☠️♥️ He went with a cross between Cupid and a player 🤣🖤♥️ •

Of course, he had to get in on St. Patricks Day right? I mean no one wants to miss out on that! Hanging out with his leprechaun homies and waving the flag of Ireland!

Most currently he is being spotted disguised as an Easter Bunny! He kind of stands out a bit right? Get your money’s worth out of that giant skeleton and bring some smiles and laughs to others!

1shares
'The Handmaid's Tale' Season 4 Trailer Is Here and I'm Freaking Out
← Previous
You Can Get A Ditto Frappuccino From Starbucks To Evolve Into Whatever You Like!
Next →
Click here to cancel reply.