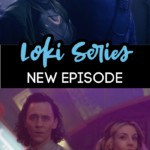 I have been on the edge of my seat for the Loki series on Disney+! But after watching today’s episode, I really don’t think I can wait an actual week for the next one.

There are spoilers ahead, so if you haven’t watched today’s episode, wait until you’re ready to be stressed out, then watch it and report back!

For those of you who HAVE seen it, we get to know the new ‘Loki’, Sylvie, better. SO that part is fine. But then they keep failing to outrun death. That’s the not fun part.

The world is ending in 2071 and they can’t seem to make their way back to the Time Keepers (who we find out are semi-frauds). Loki keeps making mistakes, putting them in severe danger, and now they’re at risk of blowing up. Awesome.

You can’t just end an episode like that! Obviously, they’ll find their way out of the situation, or this will be the shortest Marvel series I’ve ever seen. But they could have given us SOMETHING. The whole episode was stressful enough!

But hey, at least we got to hear Tom Hiddleston sing right? Now to find something to occupy me under next Wednesday…