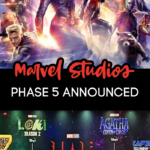 If you said anything but Marvel, you’re wrong. Just Kidding. LOL! You do you, boo.

But, you have to admit, Marvel’s been hitting it gangbusters style as of late.

Really, they’ve been busting out blockbusters since 2008. It was 14 years ago that a little film called Iron Man dropped into theaters, and changed our lives forever.

That was considered “Phase 1” of the Marvel films. And, it hasn’t stopped there.

We are now on Phase 5, and I can’t freaking wait!!

According to Nerdist, this Phase 5 will take us all the way through 2024! Bring it on!!

Get your popcorn and drinks. We are going to be spending a lot of time in theaters and on Disney+ to catch every minute of what Marvel has to bring to the table.

Here is the full Phase 5 lineup. Join me in a happy dance, will you!

I’m not seeing any Thor in there. I mean, I didn’t really expect to, since Chris Hemsworth’s Thor contract is up. BUT, I was hoping they’d surprise us. LOL!

If you haven’t yet made that dive into the world of Thor: Love and Thunder, might I suggest you go buy your tickets NOW!!