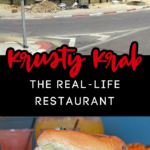 When I was younger, I was all about some SpongeBob. I still quote it on the regular.

I just found out there was a real life Krusty Krab restaurant, and I’m completely giddy right now.

I always, always, always wanted to try one of the Krabby Patties that SpongeBob so skillfully put together. I knew they were fake, but he had a way of making them look so delicious. LOL!!

Well, imagine my excitement when I found out there was a real life Krusty Krab restaurant.

I found some pictures on Facebook that say this place is in Houston, Texas — and I was overjoyed!!

But, then a bit more digging found that The Krusty Krab was actually in Palestine — like in the middle east. A bit further than I’m willing to drive.

Now, they did have a pop-up anime experience — The Rusty Krab — in Houston, TX, but alas, the pop-up experience has ended. I didn’t get to go. *Cry*

It also looked pretty legit, but not nearly as on point as the Palestine Krusty Krab.

If you want further bad news, the Palestine restaurant is actually permanently closed. BUT, the pictures are here to live in infamy — and someone else needs to pick up the idea and run with it.

Preferably, they could expand on the idea somewhere in the states. I don’t mind roadtripping, if it means a Krabby Patty is in my future!!