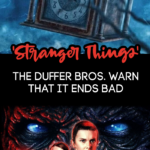 The Duffer Brothers — which, if you have been living under a rock, created Stranger Things — are warning people to prepare for the ending of Season 4 Volume 2.

They didn’t leave us in a happy place with the ending of Volume 1.

But, I thought they have to turn it around, right?

Spoiler Alerts For Season 4 Volume 1 Of Stranger Things Ahead

Apparently, even if things get better, they are going to get a whole lot worse first.

I don’t really want to say, but I would be concerned about the characters going into Volume 2, for sure.

You guys. I’m scared. We have grown quite attached to every single one of these characters, and I’m not ready to say goodbye.

When the curtain fell on Season 4 Episode 1 — it was pretty much a sh** show up in Hawkins.

Our world was literally left hanging and divided in between the real world and the Upside Down.

There were hints, red flags if you will, that some of the characters may have their moments numbered.

I mean, Nancy was left in the grips of Vecna, some crazy stuff went down with El — she is still in the world of her mind — and we found out what happened to D01 and how Vecna came about in one fell swoop.

I hope that that is sort of the sense, because it is a darker season and the kids are no longer kids. And there’s sort of an ominous feeling that things might not go well. Now, whether they do or not, you’ll have to watch.

You can’t say we haven’t been warned, although we may have been listening with guarded ears.

The cast, and the Duffer Brothers, themselves, have been leaving us little clues. They have been kinda holding our hands through Season 4. They know what’s coming, and they have been trying to emotionally prepare us.

I mean, even Will Byers (Noah Schnapp) appeared on The Tonight Show With Jimmy Fallon, and flat-out told us that people are going to die.

So, what will happen? Good or bad, we are going to find out the answers when Volume 2 drops on July 1st.