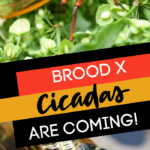 Who has an underground bunker that I can go hide out in for the summer??

This is the year of the Brood X Cicada Infestation, and I’m dying a little inside.

What is the Brood X Cicada Infestation, you ask?

Us lucky individuals in the south and southeast get to experience a little bit of a cicada infestation every summer — and they are just about my LEAST favorite bug EVER.

BUT, the Brood X Cicada Infestation is a little special. And, by special, I mean it is a little like hell on earth during the cicada summer months.

I just cried a little bit.

Once every 17 years, a truly massive brood of cicadas arrives in the mid-Atlantic and Midwest, filling the air with a deafening mating hum that can reach up to 100 decibels

I can just feel those sticky cicada legs all over my hair and clothes now. I can hear that buzzing hum that haunts my nightmares, and I don’t like it at all.

The Brood X Cicada Infestation is also known as the Great Eastern Brood, and even the name gives me the heebie-jeebies.

(Brood X) set to return in May 2021. For the five to six weeks that they’re above ground, the live cicadas — and their crunchy, discarded exoskeletons — will be impossible to miss.

Historically, Brood X has appeared all the way over to Missouri, down as far as Georgia, all the way up to freaking Michigan, and they have even been seen in Long Island, NY.

I can’t even right now. I need to seal my windows, doors, and remain in quarantine all summer!!

So, what can you do to prepare for this cicada apocalypse??

The short answer is, there isn’t much of anything you can do.

If you live in one of the Brood X stomping grounds, they are coming. Ready or not, you can’t avoid them.

The good news is that cicadas won’t bite you unless they mistake you for a plant, they won’t decimate crops like locusts do, and they don’t spread disease. They’re not poisonous, either, so there’s no worry if your dog or cat eats one.

But, you know what they are? GROSS!!! And they stick to everything.

Just TRY to get a cicada off your shirt that has mistaken your body for a landing pad. It isn’t as easy as it looks!

Trust me, I’ve tried. It lead to a lot of screaming, jumping, dancing around in circles, and flailing around in the air — and that darn cicada clung to me the entire time!!

Here’s the good news: “After mating and laying eggs in the branches of trees, this brood will die off. The cicadas that hatch in 2021 will drop to the ground and burrow into the earth for 17 years. There, they’ll feed on the fluids in tree roots until they emerge to breed in May 2038.”

So, after this summer, we should be safe-ish for 17 years from the evils of these huge cicadas.

This is gretting out of hand, what next “The Bible” just saying!