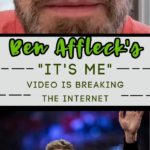 It even happens to famous celebrities — somebody swipes left on their dating profile, severing any chance they had at a love connection.

One wouldn’t think that the likes of Ben Affleck would have to resort to a dating app to make a love connection — but that’s exactly what he did.

Raya is a dating app for the rich and famous.

The likes of you and me could never make the Raya cut to get to use the Raya dating app.

It is strictly for the “A” list — celebrities, the rich, the famous, influencers.

It is a highly restricted app that relies on its exclusivity to narrow down the dating pool to include influential A-list users.

This is the app that Ben Affleck chose to use to make a match with Nivine Jay, the model and TikTok star.

Only, she didn’t exactly feel the same way.

She declined his love interest offer by “unmatching” with Ben when he tried to make the match.

See, Nivine didn’t really think it was Affleck, even though Raya is pretty stringent on who they let use their app.

She thought she was being catfished by someone pretending to be the super-hot celebrity.

Only, she wasn’t being catfished at all!!

When Nivine declined to match with Ben, he sent her an DM on Instagram letting her know the truth that it was, indeed, him.

Nivine, why did you unmatch me? It’s me!

I bet she was immediately shocked and had some regrets.

Nivine posted this regret on her TikTok account with a video that wove in Ben’s Instagram DM.

Thinking of that time I matched with Ben Affleck on Raya and thought it was a fake so I unmatched him and he sent me a video on Instagram.

The video soon had 1.2 million likes, and Ben’s profession of a missed love connection became a viral sensation.

I guess people really like to know that celebrities are just like us — sometimes they regretfully just miss out on that love connection.

Don’t feel too bad for Ben.

He has been spotted with his ex, Jennifer Lopez — who very recently split with her boyfriend, Alex Rodriguez.

Might we see reruns of Beniffer in the near future?

We’ll just have to wait and see.

1 shares
People Are Using Shoe Racks To Create A Vertical Hanging Garden And It's Genius
← Previous
This Tent Cover Turns Your Trampoline Into A Clubhouse That Your Kids Can Camp In Outside
Next →
Click here to cancel reply.