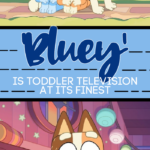 Have y’all watched Bluey on Disney+?

As a parent, there are so many shows for kids that I absolutely detest.

Caillou is at the tippity top of the list — thank the Lord above that it was cancelled.

I also can’t stand Pocoyo, The Backyardigans, Teletubbies, and Barney — but that’s beside the point, and just my very informed, personal opinion.

My kids would try to turn any of those shows on, and — BOOOOM!! — I’d veto the selection.

But, there is a show out there that’s a breath-of-fresh-air to all those parents SUFFERING through the exhausting programming that is toddler television.

That show is Bluey — which you can stream on Disney+.

If you haven’t seen it, let me catch you up to speed.

Bluey is an Australian blue heeler puppy, and she lives in a family with her mum, her dad, and her little sister, Bingo.

Being that they are Australian blue heelers, they have that AWESOME Australian accent — which I HOPE my kids pick up on!!

There aren’t your stereotypical gender roles in this show — which is AWESOME, and really a more realistic reflection of today’s society.

Her dad is a stay-at-home parent who also works from home, while her mum goes off to work out of the house.

This also isn’t your typical cartoon for kids that teaches — ad nauseam — numbers, letters, math, or any other form of school curriculum.

Bluey shows the girls experiencing life through play and exploration.

Each 9-minutes episode delves into the “tough” (sarcasm) topics of things like a “magical” xylophone that makes their dad “freeze,” keeping a balloon up in the air, playing hospital, having a BBQ, and riding a bike.

This show is just simply a fun way to learn life lessons through play.

Seriously, if you are “OVER” all the programming they have for kids on television right now, you HAVE to give Bluey a try.

Each episode is but a short snippet of programming, so you aren’t stuck watching hours of children’s TV at a time — although the kids may not want to turn it off once it’s on! LOL!

I mean, isn’t this why most of us became parents in the first place — to play, make memories, and have fun while subtly teaching life lessons along the way?