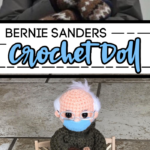 Y’all, I am laughing so hard at the creativity I’ve found today. Heck, even Bernie used it to create a sweatshirt to raise money for charity.

People took the Bernie image and ran wild with it. Now there is a crocheted Bernie Sanders in all his glory and it is the best!

They are obviously very skilled and talented, not to mention FAST! Wow, like this JUST happened!

You can even get the pattern for the Bernie and his mittens crochet doll!

People all over Facebook are going nuts over it! It has been shared so many times in the past few hours.

You must have the fastest hands in the West, that’s amazing!

One fan even photoshopped the crochet version of Bernie over the real Bernie in the now viral photo!

You can get the Bernie Sanders Crochet Doll Pattern Here.

I found something else if you are anxious to get started on some Bernie in his mittens crafts now. You have to check out this cross stitch pattern that is available on Etsy!

I made him! The pattern is very well written and detailed. He turned out super cute. I’m getting many orders for him. The new trend!

I believe it’s crochet. Amigurumi. Very easy to do, all single crochet (easy to count the stitches, too) the pattern is for sale for about $5.00, I think. I think it’s time to try a doll after all the octopi I’ve made for preemies. I gotta have one of these!

I would love to purchase one already made. Don’t know how to knit or crochet

@Mona Butler, You can visit (a dream is a wish your art makes dot com) and they are selling the finished dolls there! They are SUPER cute exactly like the one pictured here.

I am so impressed with the crocheted doll. Would love to purchase one if you are selling them. I am not good with patterns but have dabbled in crocheting quilts. Thank you, and you made my day....