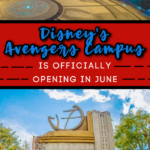 Well, it’s time to get my plane tickets to California, and book my hotel!

Disneyland’s California Adventure Park (it’s right across from Disneyland) is going to open its Avengers Campus June 4, 2021, and that loud *SQUEE* you just heard came from me.

I have been waiting — a little impatiently — for the date of opening to be announced, and Disney finally came through!

The Avengers Campus was SUPPOSED to open in the summer of 2020, but we all know what happened there.

Both Disney parks in California have been closed due to COVID-19 since March of 2020, and they are just now starting to open back up.

And, with the opening of the Disney Resort comes the HUGE announcement that — my most favorite of favorites — the Avengers Campus is now going to exist in real life.

Avengers Campus, an entirely new land dedicated to discovering, recruiting and training the next generation of Super Heroes, will open June 4, 2021 at Disneyland Resort, inside Disney California Adventure Park.

Just like with MOST things Disney — I would expect no different — this will be a fully immersive experience, and this new “land” will bring with it adventure, fun, and the latest technology.

Y’all, this Avenger’s Campus will actually have Spider-Man swinging high above — what I’m dubbing as “Avengers Land”.

Avengers Campus brings together Earth’s Mightiest Heroes for the common good, and they’re calling all recruits to join the action. Guests are invited to team up with the Avengers and their allies; sling webs with Spider-Man, taste-test inventive food and drinks and become part of a bigger universe.

Sure, there’s going to be tons of fun for the littles, but there will also be PLENTY for the grown-ups to experience as well.

I can’t WAIT to go straight to the Avenger’s Campus, and find out what MY superpower is!

Y’all, they are all going to be there: Black Widow, Black Panther, Thor, the Guardians of the Galaxy, Captain America, Captain Marvel, Ant-Man and The Wasp, and even Doctor Strange.

I would by lying if I said I wasn’t looking forward to meeting Thor first hand. Sure, it isn’t Chris Hemsworth, but I can dream, can’t I?!?

There is going to be WEB SLINGERS: A Spider-Man Adventure — which is the FIRST Disney ride-through that features superheros.

Tom Holland reprises his role as Peter Parker in the family-friendly attraction, which blends physical sets and virtual environments to take new recruits on an interactive escapade.

So, basically, pack your bags and book your trips, because this new Avengers Campus is going to be EPIC!!