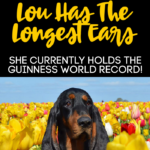 Lou is a 3-year-old Black & Tan Coonhound that has broken a Guinness World Record for having the longest ears on a living dog!

Paige Olsen is the human that belongs to Lou, and one day during the shelter in place orders, she decided to measure those ears.

She knew the ears were long, but she had no idea she had a record-breaker on her hands.

Their long ears drag on the ground and stir up scents when they are tracking out in the field. It makes them great at following long, very old or ‘cold’ tracks that other breeds of dog may not pick up on.

Each of Lou’s ears measures 13.38 inches long, or 34 cm and that indeed broke the world record for the longest ears on a living dog.

That means she is featured in the new Guinness World Records 2022 book and how cool is that??!!

Lou doesn’t just have fantastic ears, she also competes and has titles from the American Kennel Club and Rally Obedience!

Of course everyone wants to touch the ears, they’re very easy to fall in love with just one sighting.

You’ll be able to post Lou on the pages of Guinness World Records 2022, which is available now!