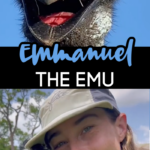 They say a man’s, (or a woman’s) best friend is their dog, but what about an emu because according to this TikToker, it looks like her BFF is a flightless bird.

TikToker @knucklebumpfarms, also known as Taylor Blake who takes care of the second tallest bird and is also the one who shares videos of farm animals she takes care of including the famous Emu.

“He’s so quirky and so unique. And there’s not much that I don’t love about him, to be honest,” Taylor Blake explained to PEOPLE.

Meet Emmanuel Toddd Lopez, the Emu who has taken over social media with his quirkiness and interruptions during Taylor’s TikTok videos.

A year ago, Taylor moved to her grandparents’ mini cattle hobby farm located in Florida to help her family run the farm.

“I’ve taken on the role as caretaker of all the critters,” Taylor said to PEOPLE. “I grew up on this farm, so I’ve been here my whole life. I’ve always done fun videos with the animals. I always spend a lot of time out with the animals. I’m very bonded and connected to all of them.”

A few months ago when Taylor decided to create the TikTok account which was originally run by cute baby calves, says it wasn’t until Emmanuel made it to the Internet where her videos started raking up views.

But “all it took was an emu to really set things off,” she said to PEOPLE.

One of his first appearances included Emmanuel interrupting a TikTok recording to simply only stare at the screen.

And according to Taylor, Emmanuel doesn’t prefer phones because she believes the emu dislikes when the attention isn’t focused on him.

So what else is there to know about Emmanuel?

He’s currently seven years old, about 5 foot 8 inches tall, and bff’s with Taylor, but we already knew that last point.

“He genuinely loves me. He can be laying down somewhere in the pasture, and I can walk right up to him and lay down on the ground next to him and just cuddle him,” she stated to PEOPLE. “He’s just so great.”

And even though Emmanuel doesn’t like cellphones, he is the star of the show when it comes to the TikTok account and apparently, he’s a natural on camera.

“I can honestly say I never in a million years expected him to be the one that went crazy viral. But I’m so glad that it was him because he’s such a natural on camera,” she says.

“What I’m enjoying most about it is just knowing that we are creating content that is genuinely bringing people happiness and spreading joy across,” Blake says. “I’m very, very, very thankful for that.”

Who knew an Emu could have such star quality!