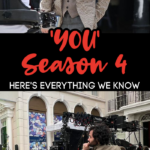 I miss Joe, that loveable serial killer… it’s been way too long.

Every new season of ‘You’ has brought major changes, and season 4 has many more!

Season 4 was announced before season 3 was even released and I sure hope we have many more seasons of ‘You’.

We’re deeply grateful that Netflix has shown You such monumental support, and that people around the world have enjoyed watching Joe really get it all very wrong over the past 3 seasons. The whole You team is excited to explore new, dark facets of love in season 4.

We’ve seen Joe go from New York to Los Angeles, then to Madre Linda, and now he’s in Paris, France!

That isn’t all that has changed, the sweet-faced serial killer Joe is now sporting a beard!

If you haven’t finished season 3 of ‘You’, be careful about reading more because there are spoilers ahead… this is your warning to dip out now!

At the end of season 3, we saw the end of the toxic relationship between Joe and Love.

Even though Joe is a killer, Love was just a bit way too over the top for him with her lack of restraint when killing.

Yes, Joe is psychotic himself, but with the right balance, he can pretty much control himself, whereas Love has zero self-control.

Joe ended it in a big way and headed out to track down his current obsession, Marianne… the librarian.

He had to change his identity once again and Joe is now Nick and he is in Paris searching for Marianne.

From what we can tell, at least part of season 4 of ‘You’ will take place in Paris, but we are not sure how much of the season will be in Paris.

I think Joe is great when he’s in an environment that’s not natural to him, that’s foreign to him. So literally foreign could be very cool. And it’s a big, wide world out there. That’s something I’ve learned from watching Netflix, where I’ve been watching shows from lots of other countries lately. It’s the thing about being in a pandemic. You’re home. You can barely go down the street, much less get on a plane. And I have to say, it’s made us want to explore more of the world in any way we can.

Sera Gamble said in an interview with EW

Joe, now known as Nick, may have to flee again because wherever Joe goes bodies turn up too!

So far the only confirmed cast member from season 3 to appear in season 4 is Penn Badgley for his role of Joe/AKA Nick.

We assume that Tati Gabrielle is returning as Marianne, but haven’t seen a confirmation of that.

Also, as of right now, Netflix has not announced a release date for season 4 of ‘You’, but we will update as soon as we know.