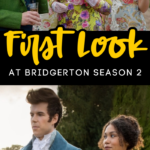 Any other Bridgerton fans impatiently waiting for Season 2 to drop!?

If you binge watched your way through Season 1 like me, odds are, you’ve been keeping an eye out for any news about Season 2! And we finally have some!

Netflix has finally released a ‘first look’ of Season Two, which showcased Anthony Bridgerton and Kate Sharma in a heated conversation!

The production of this new season was shut down countless times due to Covid, so the release date still isn’t set, but at least we finally get a sneak peek!

Season 2 is set to cover the second book in Julia Quinn’s Bridgerton series, The Viscount Who Loved Me. But don’t worry, supposedly the Duke of Hastings will appear in a cameo so we can at least get a glimpse of him this season!

Watch this first look trailer below to see what’s in store for the next season of Bridgerton!