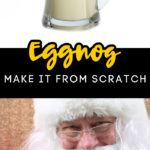 Eggnog. You either love it, or you hate it. There doesn’t seem to be an inbetween.

I used to be a hater of the creamy, eggy, Christmastime beverage, but I’d only had it out of cartons from the grocery store — not appealing to me (although many LOVE it).

Then I got a wild hair, and for some reason decided to make my own from scratch.

OMG. Can I just tell you — there IS an inbetween to the Eggnog debate. I HATED it from the store, but when I made it from scratch — you just have to try it!!

Eggnog is super easy to make. It seems like it would be intimidating, but I PROMISE, it’s super simple.

It’s also highly possible that you already have most of the ingredients in your kitchen right now.

You might have to make a trip to Walmart for some Heavy Cream, but that’s probably it!

Go ahead and gather up your ingredients, and let’s get to making some Eggnog!

How To Make Eggnog From Scratch

1/2 Cup Granulated Sugar (Heavy hand it if you love the sweet!)

Get a whisk, and whisk together the egg yolks and sugar in a bowl. Keep it separate for now.

Over medium heat, combine the milk, cinnamon, nutmeg, salt, and heavy cream in a saucepan.

Stir it pretty continuously — you don’t want the milk to burn — until it JUST reaches a simmer.

Now, you need to “temper” the eggs, so they don’t scramble — but this is easy to do.

Get your egg mixture, and add to it a spoonful of the hot milk mixture. Whisk it well.

Keep adding your milk mixture to the egg mixture a spoonful at a time, and whisking each time you add the hot liquid.

You want to do this maybe four or five times. You are trying to get the egg mixture up to temperature without scrambling the eggs.

Once you are done “tempering” the eggs, add them all at once to the mixture in the saucepan.

Whisk the mixture together for a few minutes so it will thicken. If you want to get all fancy with a thermometer, it should read 160º (F) when done.

Remove the mixture from the heat and stir in your vanilla.

If you want to make it an adult beverage, this is the point you would add your bourbon or rum.

Now, cover your mixture and refrigerate it until you are ready to serve it.

When you are ready, serve it in pretty holiday glasses, and garnish with some whipped cream and a sprinkle of cinnamon.

If you want to get SUPER fancy, you can add a cinnamon stick in for some holiday flare.

By the way, Eggnog is usually good, as long as you keep it refrigerated, for about a week.

Whisk together the egg yolks and sugar in a bowl.

Over medium heat, combine the milk, cinnamon, nutmeg, salt, and heavy cream in a saucepan on the stove.

Stir continuously and only until it JUST comes to a simmer.

Temper the egg mixture by slowly adding a bit of the hot mixture, a spoonful at a time and whisking with each addition.

Add the egg mixture into the hot mixture, and whisk it until it thickens or reaches 160º (f) on a thermometer.

Stir in the vanilla and alcohol (if desired).

Cover it, and put it in the refrigerator until you are ready to serve it.

When you pour it, garnish with whipped cream, cinnamon, and a cinnamon stick (if desired).

Will last up to a week covered in the fridge.