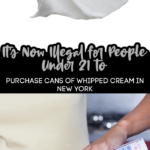 Want whipped cream? You now have to be of age.

The state of New York has recently passed a law that makes it illegal for individuals under the age of 21 to purchase cans of whipped cream.

The recently-passed state law, which went into effect in November of last year, is to protect and prevent teens from using the cans of cream to inhale nitrous oxide, also known as “whippets.”

“Inhalants are invisible, volatile substances found in common household products that produce chemical vapors that are inhaled to induce psychoactive or mind-altering effects,” according to a US Drug Enforcement Administration factsheet.

The DEA also mentions that approximately one in five of younger individuals have used inhalants like whippets by the time they reach grade eight.

Abusing inhalants can cause damage to the mind including “parts of the brain that control thinking, moving, vision, and hearing.”

New York State Senate Joseph Addabbo of Queens sponsored the law after he received complaints of empty cans of whipped cream that were littering the state of New York.

The need to limit the access and sale of whippits first became apparent after receiving constituent complaints about empty canisters on neighborhood streets. Used whippits piling up in our communities are not only an eye sore, but also indicative of a significant nitrous oxide abuse problem,” said Addabbo in an October 2021 statement.

“Nitrous oxide is a legal chemical for legitimate professional use but when used improperly, it can be extremely lethal,” Addabbo stated. “Sadly, young people buy and inhale this gas to get ‘high’ because they mistakenly believe it is a ‘safe’ substance. This law will eliminate easy access to this dangerous substance for our youth.”