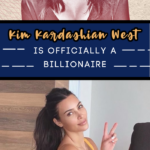 Guess who was officially on the list: Kim Kardashian West.

Kim joins names like Jeff Bezos, Elon Musk, Mark Zuckerberg, and Bill Gates on the list of the richest people in the world.

I mean, don’t get me wrong — all those Kim K. side projects helped, but it was her cosmetic line and her shapewear business put her over the mark.

Forbes estimates that Kardashian West is now worth $1 billion, up from $780 million in October, thanks to two lucrative businesses—KKW Beauty and Skims—as well as cash from reality television and endorsement deals, and a number of smaller investments.

KKW Beauty, which she launched in 2017 rakes in the money, selling things like “eyeshadows, concealers, lipsticks and fragrances.”

In fact, I’m willing to bet that most of you HAVE, or know someone who has purchased something from KKW Beauty.

If you haven’t bought into the Kim K. beauty line, odds are you’ve looked into one of her shapers from her Skims line.

The girl was smart, I’ll give her that. When the pandemic hit, she moved her Skims line into selling lounge wear that we could all wear around the house.

It’s the first time I’ve moved away from having licensing deals and transitioned into being an owner.

She took advantage of her huge success with KKW Beauty, and last year when she sold 20% of the ownership to Coty.

That, along with her majority stake in Skims, and all her investments and real estate pushes her over the $1 billion mark.

WTG, Kim — and can we somehow be related, please?!?

1 shares
Have Unwanted LEGOs? This Company Will Wash and Mail Your LEGOs To A Child In Need
← Previous
People Are Pouring Vinegar On Slices Of Bread and I Am Trying It
Next →
Click here to cancel reply.