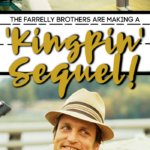 This is the best news I have heard all day, a ‘Kingpin’ sequel is coming!

Peter and Bobby Farrelly are the brothers that make some of my most favorite movies!

The Farrelly brothers are the geniuses behind ‘Kingpin’, ‘Dumb and Dumber’, ‘There’s Something About Mary’, and ‘Me, Myself & Irene’.

All of these movies I have watched more times than I can count on both hands!

The original ‘Kingpin’ movie came out way back in 1996 and the sequel is in active development with Village Roadshow Pictures according to Collider.

Woody Harrelson, Randy Quaid, and Bill Murray were absolutely amazing in this comedy that was centered around some serious bowling.

If you have never watched the original ‘Kingpin’, I highly suggest you go watch it now!

As of right now there haven’t been any details released on the sequel.

No plot, time period, cast, or even a script, but the Farrelly brothers are working on it!

It would be amazing if the original cast was involved again , at least Woody Harrelson!

That’s all we know for now, but as soon as we see more details we will be sure to share them with you.

I am seriously super stoked about this, one of the funniest movies ever and the Farrelly Brothers rock everything!