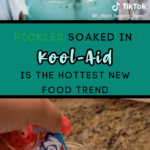 Pickles drenched in ranch and pickles that are dusted in taco seasoning are officially considered old news.

Pickles soaked in Kool-Aid is the hottest new food trend everyone is trying on TikTok and let me just say that these pickles might be the sweetest ones yet, not to mention the most colorful.

The Kool-Aid packets that you would usually mix with a glass of water to entertain a kid’s birthday or to simply sip on a hot summer’s day, is now being used as a worldwide trend and mixed with pickle juice instead of H20.

Whether you decide to use pickle chips, spears or vertical slices, it doesn’t matter which style pickle you choose to dunk into Kool-Aid juice.

Since there are a variety of Kool-Aid flavors to use, the most popular colors used on TikTok are Cherry, Raspberry Lemonade and Tropical Punch, just incase you need a reference.

After committing to a Kool-Aid flavor, make sure to dunk the entire packet of sugary mix into the empty can of pickle juice and yes, you will need to remove all of the pickles so you can properly mix together the powder and the juice.

Next, put your pickles and let them sit in the mix for at least 24 hours.

While some TikTok users have waited a few days for the pickles to marinate, a few have even waited an entire week because the longer you allow your pickles to sit, the stronger the flavor will be!

Now we know that you know that combining Kool-Aid packets and pickle juice are two entirely different flavors, while one may be sweet and the other sour, there’s no way to know for sure if the concoction tastes well unless we try first!

Have you ever heard the saying opposites attract; this is the perfect example!