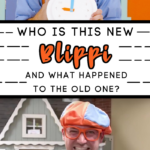 If your kids are addicted to the larger-than-life character that is Blippi, you may have noticed Blippi looks just a little different.

Stevin John, the creator of Blippi, is apparently needing a little help in the world of Blippi, so there is now a second Blippi in town.

This all started when parents were ENRAGED that Stevin wasn’t going to be showing up as his famous character in the live Blippi shows.

People had already bought their tickets and everything, and then they found out Blippi was being swapped for a stage actor that wasn’t Stevin — like kids wouldn’t notice that?!?

I mean sure, Blippi would still be acting over the top, and wearing his trademark orange eyeglasses, hat, bowtie and suspenders, but people thought they were paying for Stevin, and instead they were getting an imposter of sorts.

Steven has embodied the persona that is Blippi since 2014, and even though this stage actor — Clayton Grimm — kinda looks similar to Blippi, it’s just not the same thing.

In a move that is reminiscent of when Blue’s Clues lost Steve, this week saw Grimm show up as Blippi in a new Learn with Blippi show on Saturday morning.

Due to popular demand we are bringing more Blippi from The Live Show to you all! ? Don’t miss the launch of ‘Learn with Blippi’ tomorrow on Blippi’s YouTube channel. Who’s ready!?

Fans and parents immediately chimed in — as if no one would notice.

It turns out — there are now going to be TWO Blippis.

Blippi, Stevin John, isn’t going anywhere. John will continue to bounce and beep his way through family-friendly attractions in videos to come, with Grimm — helming a set-based format that’s more in line with the Blippi stage show, which will resume touring this summer.

In order to bring out more Blippi content, they are going to split the programming between the TWO Blippis.

I mean, shouldn’t they call him Bloppi or Flippi or something different? Having two different Blippis is not going to fly with kids or parents.

What do you think about this new addition to the world of Blippi?

My 5 year old daughter put Blippi on. I made the comment(I didn’t know there is another person) oh that’s not the same person! My daughter said ya because that’s blippi number 2. She is ok with this. She likes both actors.

I'm looking in netflix and the guy don't look the same at all. My daughter is not interested in the new guy.

The worst part about this is that I am a 37 year old man wasting my life doing an internet search about blippi being a different actor. I can’t stand this show, but my kids love it.

No disrespect to the new dude. He is playing the role well but it's just unfortunate how I was saying ti myself that this is a different person and boom my 6yr old daughter and 4year old son immediately said it out loud. They are just not happy and want the old blippi back

My 4yr old grandson knew it wasn't Blippi. I think the new guy should have a different name and could be Bilippi's cousin or brother or something like that. But not 2 different Blippis