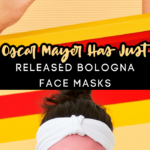 Whether you fry bologna on a skillet for your breakfast sandwich in the morning or you simply eat it straight from the packaging, you can now add ‘face moisturize’ to the long list of benefits bologna can do for you!

That’s right, the cold cut slices you use for sandwiches can now be used as a calming face moisturizer face mask for better skin that glows.

What Is A Bologna Face Mask?

Thanks to Oscar Mayer, (you may have head of them), the company that popularly sells bologna meat in the yellow and red packaging that you can snag from the grocery store came up with the idea to create a face mask that is simply unlike the rest.

Considering this face mask is inspired by well, meat, you might be asking what could possibly be the benefits of a meat inspired face mask; so let me break it down for you.

Dubbed the Oscar Mayer Bologna Hydrogel Sheet Face Mask that emphasizes on moisturizing your skin, while the sheet face mask is inspired by the popular deli meat, it’s not edible and it is not real bologna; so don’t put it on a sandwich and instead put it on your face!

Made from Witch Hazel Botanical and seaweed-derived ingredients to protect your skin and hydrate it simultaneously, the aded collagens also keep moisture in and help with skin elasticity!

So the next time you complete your skin care routine at night, don’t forget to add on the deli-cut inspired face mask to your beauty routine, and you can find it on Amazon!