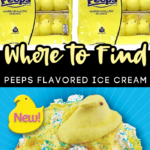 Ice cream flavors are meant to be thought of outside of the box.

Peep’s flavored ice cream is coming to an ice cream store near you and if you’re wondering which Peep this new ice cream flavor idolizes spoiler alert, it’s the yellow one!

Yellow ice cream made to taste sweet, this new sweet treat is flavored marshmallow mixed with chunks of whipped cream, blue sugar crystals, and a yellow marshmallow Peeps chick laying on top to complete the look.

Sitting pretty on top of a cone or in a bowl, you can find the new ice cream flavor at Cold Stone Creamery locations!

Featured in their Signature Creations, the new Peeps flavored ice cream was created to celebrate the spring season with bright colors and a flavor that will make our tastebuds excited for warmer weather days.

Served as ice cream on top of a cone or whipped as a shake dubbed the ‘Shaking it up with my Peeps’, the only difference is the whipped cream that sits on top of the shake rather mixed in with the yellow ice cream.

You can sip through a straw or lick the new Peeps ice cream beginning today, April 1 at Cold Stone Creamy stores nationwide and no, this is not an April Fools joke if that’s what you were thinking.

Considering this limited edition ice cream is not a permanent addition to menus, the ice cream departs May 10 so get the new flavor while it’s still being scooped.