Peloton Refuses To Recall Their Tread+ Treadmill After Several Are Injured 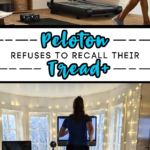 Peloton is in a bit of hot water at the moment.

They are super cool, super sleek, and super sought after — just the NAME Peloton makes you want to get up and workout, doesn’t it?

Unfortunately, there have been several incidents lately where pets and small children have been injured by getting trapped under the Peloton Tread+ exercise machine.

You know the Peloton Tread+ — it’s the treadmill that helps you “go the extra mile with added support under every step.”

While it may sound like THE treadmill that everyone should own, the horrible incidents related to the Peloton Tread+ have caused the U.S. government to release a warning statement regading the exercise equipment.

To date, CPSC is aware of 39 incidents including one death. CPSC staff believes the Peloton Tread+ poses serious risks to children for abrasions, fractures, and death. In light of multiple reports of children becoming entrapped, pinned, and pulled under the rear roller of the product, CPSC urges consumers with children at home to stop using the product immediately.

The CPSC is urging consumers to stop using the products immediately.

Peloton definitely does not agree with the statement issued by the CPSC.

They have issued their own statement saying that one only needs to use the equipment properly, and heed all the warnings before turning the machine on.

Peloton said there’s “no reason” to stop using the machine if safety instructions, such as correctly using its safety key, are followed. It also said that the Tread+ should be kept away from children under 16 years old and pets “at all times.”

CPSC even released a video of a child getting sucked under the Tread+ and stuck.

Peloton took immediate action, stating that, “The Tread+ includes safety warnings and instructions in several places, including in the user manual, in a safety card left on top of the Tread+ tray on delivery, and on the product itself.”

They went on to say that if the “safety key” would have been properly used, the incident in the video would have never happened the way it did.

(John) Foley said that Peloton has “no intention” of stopping sale of the Tread+ and reiterated the company’s previous message of keeping the machine away from children under 16 years old and pets.

There has not been a recall issued on this device, but PLEASE, if you use one of these devices, please use the utmost care to protect your children and pets.

1 shares
This Woman Had A Wire Bristle Stuck In Her Throat And It Is Terrifying
← Previous
Smirnoff ICE Pink Lemonade Is Here. So, Bring On Summer
Next →
Click here to cancel reply.