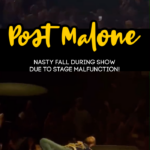 I was scrolling through TikTok like I normally do when I am bored and came across a TikTok post from Post Malone’s concert Saturday in St. Louis at the Enterprise Center.

Everything was going great then suddenly you can see that there is a portion of the stage open in the center.

Of course, Post Malone is just doing his thing and singing his heart out when he steps directly into the hole in the stage, taking a pretty nasty bang-up fall.

The hole is normally closed and is used to lower instruments from the stage and out of sight, but this one remained open and he didn’t notice it.

In the video, you can see that he is hurting pretty badly as medics rush to the stage to assist him because he couldn’t leave the stage on his own.

He asked fans to give him a few moments.

Once he had been helped off of the stage fans assumed the show was probably over, but after about 10 minutes Post Malone returned to the stage and apologized to the fans.

He was in so much pain that he was crying and then a fan handed him a beer and Post Malone went on with his show singing a few more while holding his ribs!

He said that he did have to go to the hospital, but he is doing ok and that the tour will continue.

You can watch a video leading up to and showing the fall and aftermath on TikTok.

Post Malone took to Twitter to let everyone know he was doing fine and that he was sorry and that he loves everyone.