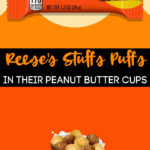 Reese’s is stuffing their chocolate cups with something other than just peanut butter.

But this isn’t the first time the Hershey company has experimented with their beloved snack.

If it’s not broke don’t fix it, except if you’re Reese’s considering the sweet treat giant has been creating new versions of their peanut butter cup ever since adding pretzels and cramming chips inside.

And as we already know, Reese’s has dabbled in breakfast but mainly shines in dessert but today that changes.

Dubbed the Reese’s Big Cup with Reese’s Puffs is their latest version of the classic peanut butter cup and is bigger than the normal-sized snack.

Stuffed with Reese’s Puffs and wrapped individually in yellow and orange, this epic mashup features double the chocolate, double the peanut butter, and don’t forget the extra crunch!

And thanks to the cereal jammed inside, could we technically call this breakfast? Just kidding.

“Collaborations are quite popular but what we are about to unleash is next level. We knew the ultimate mashup was already within the Reese’s universe, so we made it happen,” stated Henry Hancock, senior associate brand manager at Reese’s in a recent press release. “We’re taking chocolate and peanut butter fandom to a new stratosphere by adding Reese’s Puffs cereal to our Reese’s Big Cup.”