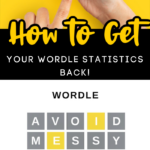 Candy Crush officially came out 10 years ago, feel old yet?

Considering Candy Crush is no longer the latest craze, let me introduce you to Wordle, the newest game on the Internet that has taken over tablets, iPhone’s, and laptops by storm.

If you have’t played Wordle yet it’s simple.

With six tries to guess the five letter word of the day, Wordle is basically the advanced version of the ‘hot or cold’ game you might have played when you were little.

With each word you guess, Wordle lets you know if you’ve at least guessed the right letters even if the entire word is wrong.

When you see green letters, you know that the letter is in the correct spot, yellow letters tell you the letter is correct but is in the wrong spot, and greyed out letters interpret as letters that are not used in the word.

As you continue to play, your game stats will be recorded for you at the end of each round but as of lately, players have noticed their statistics have been reset.

The game which has recently been acquired by The New York Times, fans who were used to the old URL have been forwarded to the new one while explaining to fans that their statistics would be safe.

In a statement to The Verge according to spokesperson Jordan Cohen, The New York Times has explained that player’s statistics including streaks should be updated with the new URL for the “vast majority” of individuals who like to play.

However, if you’re still noticing problems with your statistics after you play, here’s how to fix that.

According to Cohen, players who want to transfer their Wordle statistics need to first open the game with the last URL that held their stats which should be either the original Power language or The New York Times’ version.

This will automatically redirect them to The New York Times Wordle page, carrying their stats and streaks with them,” Cohen said.

In other words, if your normal routine is playing Wordle through the old URl, “powerlanguage.co.uk”, do not try to play the game directly through The New York Times’ website.

By visiting the “powerlanguage.co.uk” URL, the link should automatically forward you to the new address with your statistics intact.

Cohen recommends that it’s important to keep to do this technique using the same device you typically use to play Wordle.