When I was a kid, family game night usually involved a never-ending game of Monopoly in which I was forced to be the banker so that I might learn some math skills (that didn’t work very well), or my dad teaching me how to play poker (that worked a little better – getting to keep real money is a great incentive). Now that I’m what the civilized world tends to refer to as “an adult,” I’ve discovered that there’s a whole lot more games that I never knew about as a kid, and the board game market just keeps expanding. Finding Family Friendly Games to get your kids involved in your own family game night this new year – and hopefully away from their cell phones and tablets for a couple of hours – isn’t hard. In fact, you’re sort of spoiled for choice. Not sure where to start? Well, I might have a few ideas… 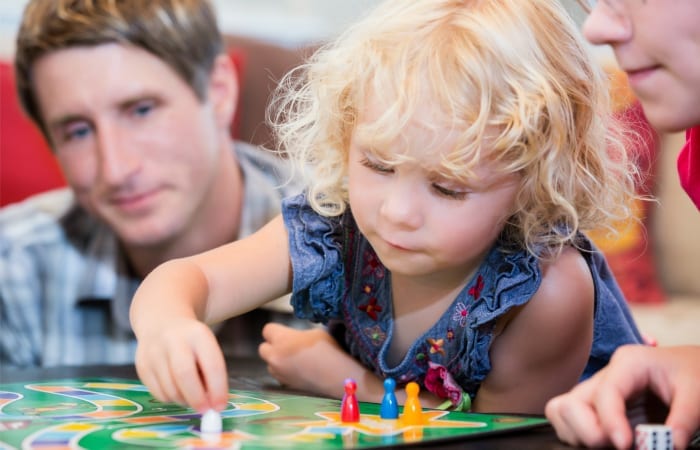 I’ve included the manufacturer suggested ages for each of these games, but as with all things, it’s up to you to decide if a game is appropriate for your kids, whether that’s younger or older than the age suggestion. Now, these are in no particular order, but if I had to suggest the perfect starting game… 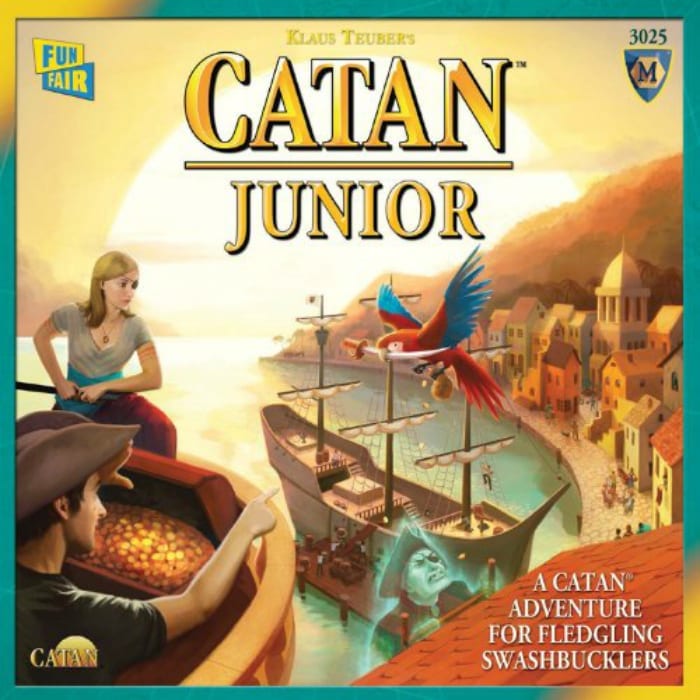 For many tabletop gamers, myself included, Settlers of Catan is the gateway game that introduced us to the world beyond Monopoly, Clue, and Risk. Catan: Junior is the perfect introduction to board games geared toward a younger crowd, while still keeping the adults playing with them from nodding off while the kids take their turns. Players will spend their turns collecting resources like wood and molasses, acquiring gold, and building pirate ships and hideouts. Ages 6+ 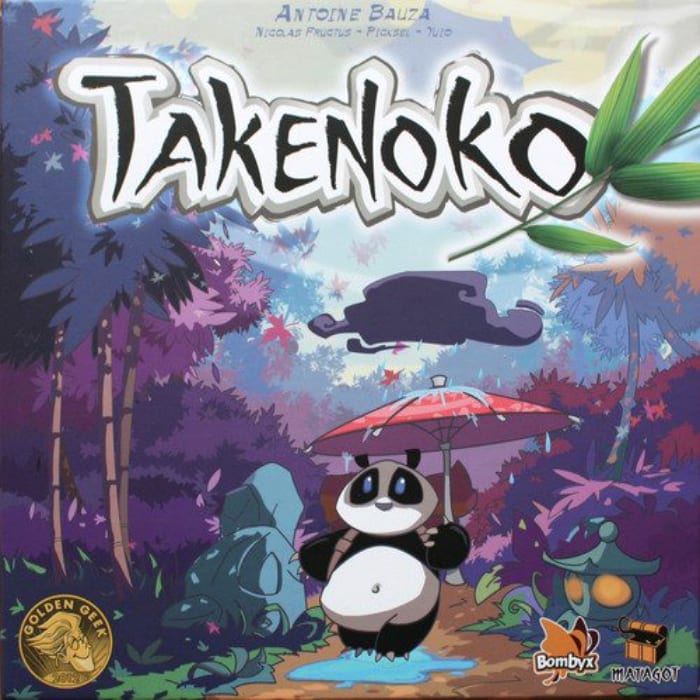 In Takenoko, players attempt to appease the Emperor of Japan by tending to the bamboo garden of his treasured giant panda by completing the instructions on a set of cards. You can send the gardener around to grow bamboo, but if you’re not careful, the panda will come around and eat all of your hard work! The recently-released Chibis expansion adds a female panda and little baby pandas to the mix – you know, if you’re into that sort of thing. Ages 8+ 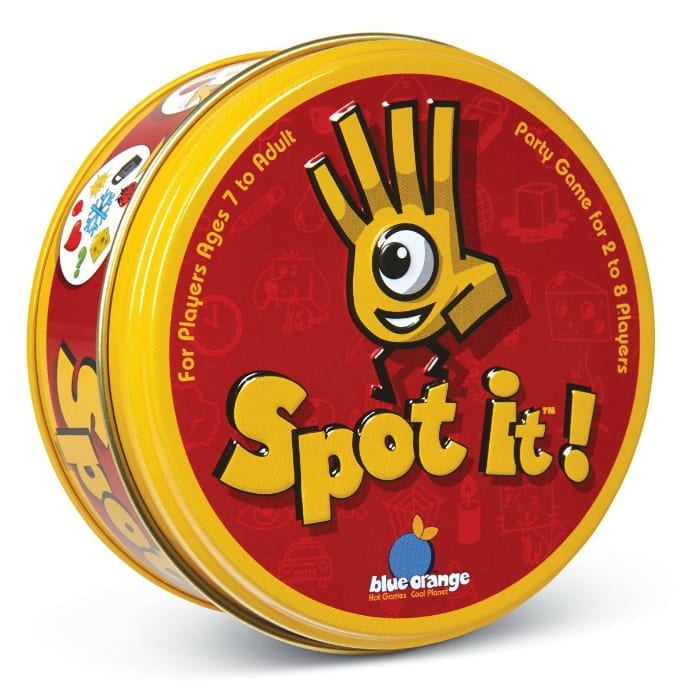 If you’re looking for a fun, quick game that everyone can play at once, look no further than Spot It! In this symbol matching game, players will collect cards from the deck by matching one of the eight pictures to one on the card in their hand – the player with the most at the end wins! There are several rule variations included in the rules that make sure this game will never get boring, but you can always try out a few of the numerous other versions of the game too, including Animals, Disney’s Frozen, and Disney Pixar. Ages 7+ 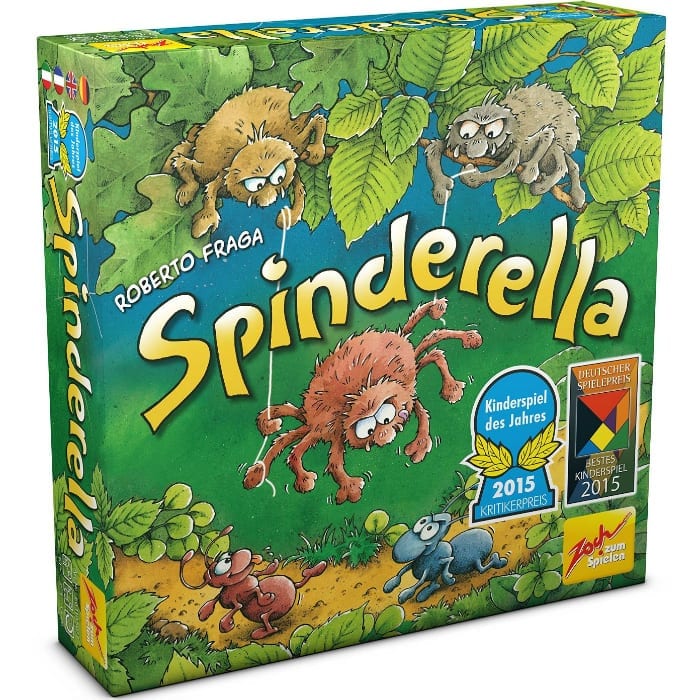 The 2015 Kinderspiel des Jahres (the children’s game version of the awards that send board game nerds like me into a frenzy of impulse buying) winner, Spinderella is an interactive dexterity game where players have to get their three ants across the forest floor before the spider hanging above them – controlled by their opponents – can swoop down, scoop them up, and send them back to the start. It’s a simple concept that’s beautifully executed and illustrated, and a great way to start off a night of family gaming. Ages 6+ 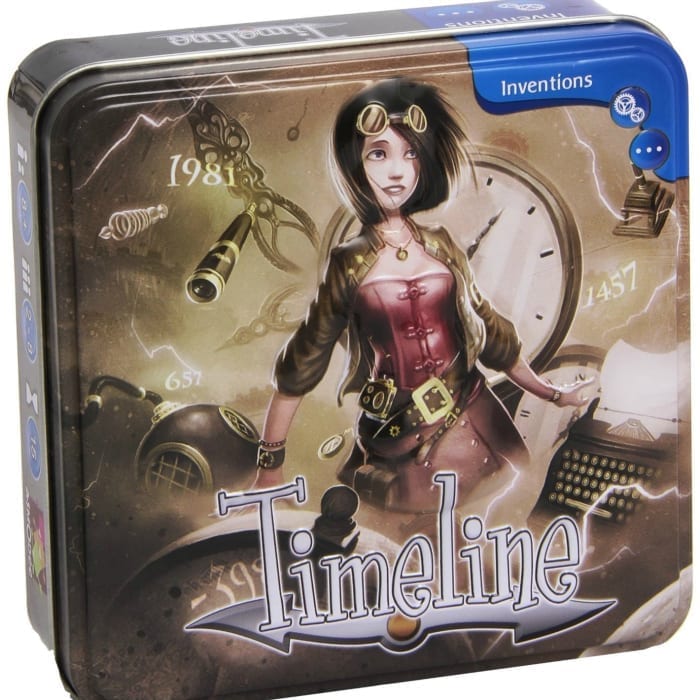 In the original Timeline game, players attempt to place cards featuring historical events, inventions, and discoveries from their hand into chronological order based on the year they happened. This is a great little game that will just as easily test your own knowledge of history as it will your kids’ attention in history class and, shockingly, everyone might actually learn something while playing. And there are several different versions of the game, including Music & Cinema, Americana, and even Star Wars. Ages 8+ 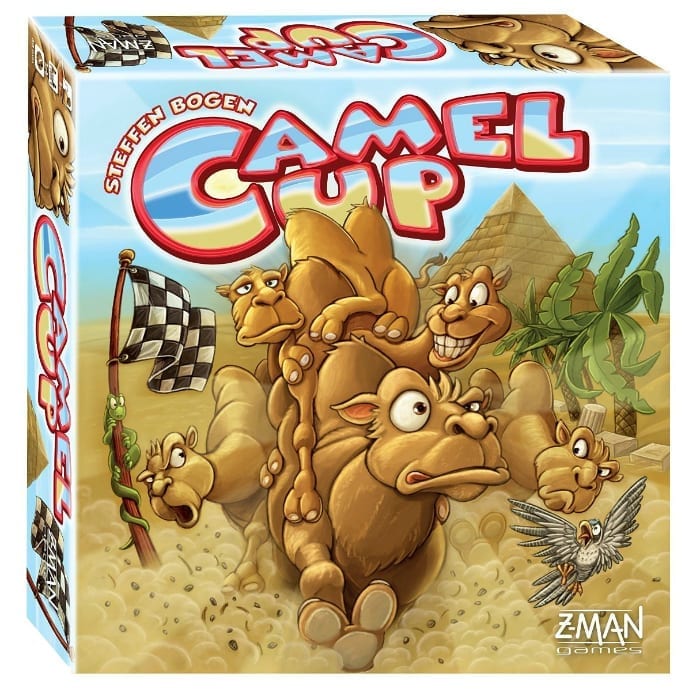 Another Spiel des Jahres winner, Camel Up pits players against each other as camel race observers betting on the outcome of a five-camel race around a pyramid. But just like your kids when you’re running late in the morning, these camels never do exactly what you want them to, and the outcome of the race depends on the roll of the dice. This fun little game even comes with a set of camel figurines and a pop-up pyramid. Ages 8+ 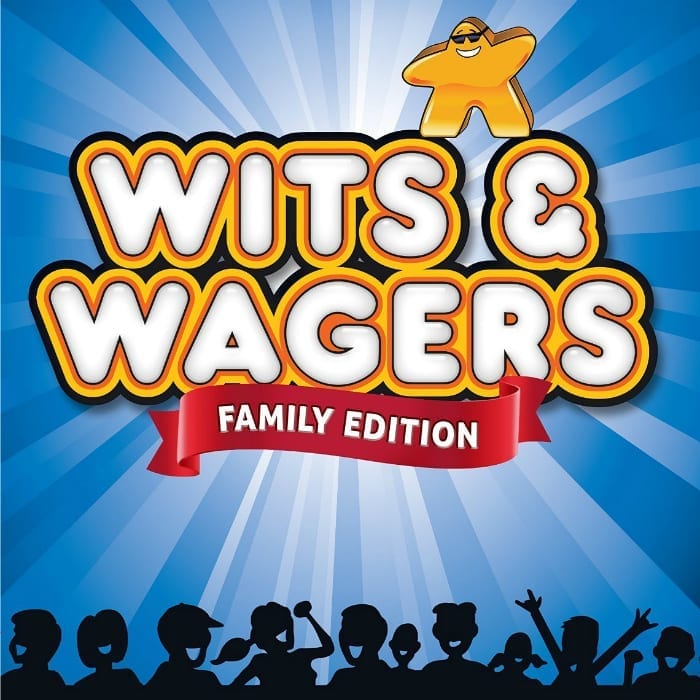 Wits & Wagers Family is a simplified and more portable – although no less fun – version of the original Wits & Wagers. In this family friendly trivia game, players write down their numerical answer to a question on a dry erase board, and then everyone votes on which answer they think is closest to the correct one. This is another game where fun and learning go together beautifully. Ages 8+ 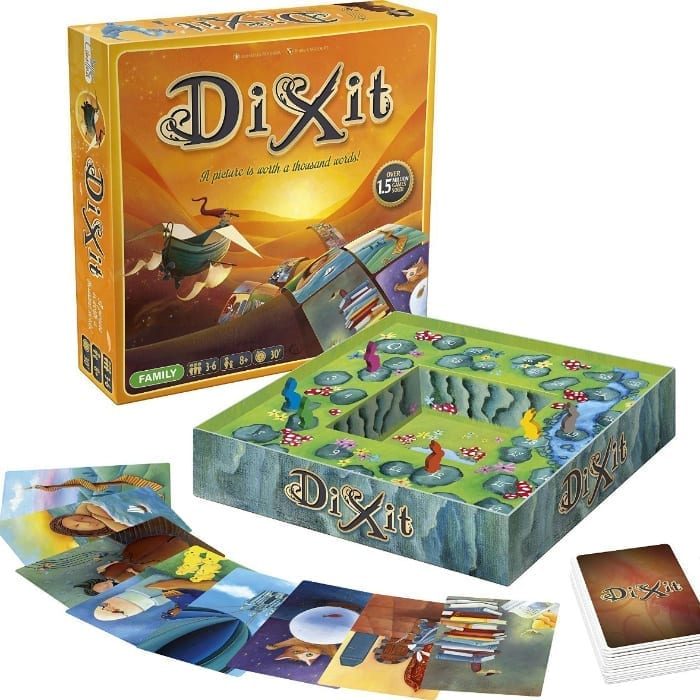 Dixit is a fantastically whimsical game where players take turns being the storyteller, selecting a card from their hand and giving the other players a word, phrase, sentence, song, etc. describing it. Everyone else chooses a card from their hands that they think best matches that clue, and points are awarded according to how the players vote on which card they think was the storyteller’s. The art on these cards is just beautiful, and there are so many expansions, like Odyssey, Daydreams, and Memories, that it’s impossible to get bored of the game. Ages 8+ 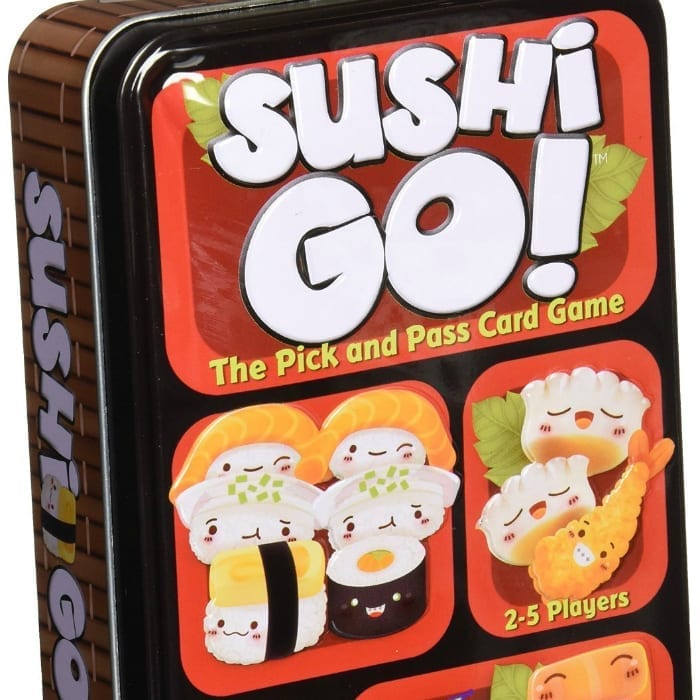 The only game on this list likely to leave you hungry at the end of it, Sushi Go! is a super fast card drafting game where players try to score the most points by collecting the best combination of sushi dishes that they can. But be careful which cards you pass to your opponents – they might be just the ones they need to complete their own combos! Ages 8+ 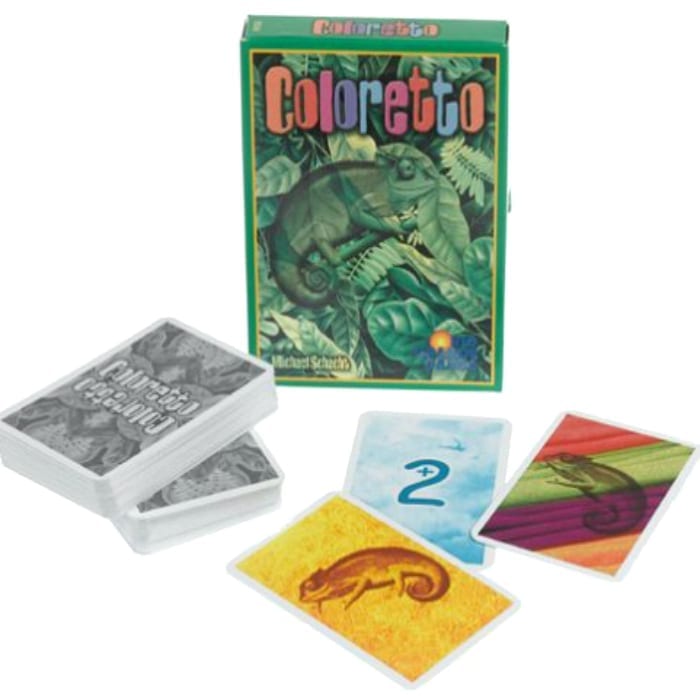 Coloretto is a set collecting game where players try to get as many cards as they can in three colors of their choice – and only those three colors, because every card they have of another color will cost them points. This is a simple game that most kids will have no trouble with – although not so simple that it will leave the adults at the table wishing for a quick, rainbow-colored death. Of course, if you want a game with a little bit more depth that your older kids will still love, you can try Zooloretto! Ages 8+ 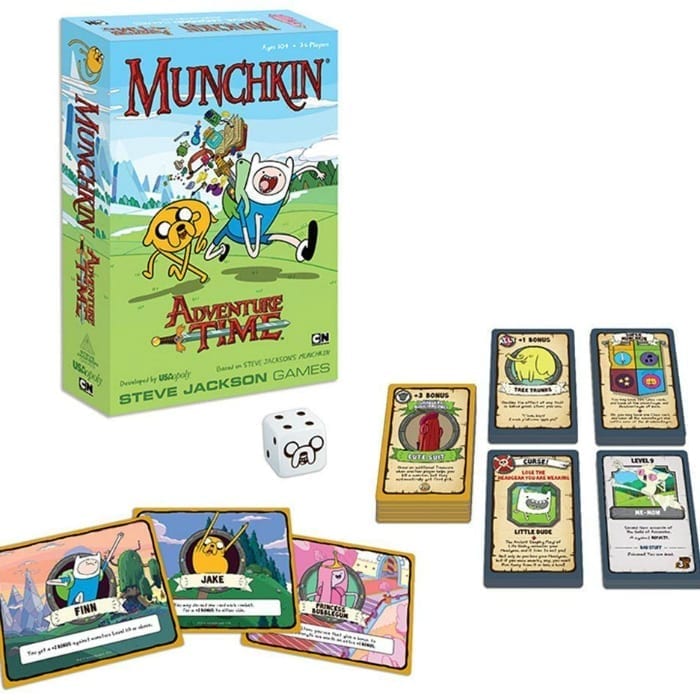 The Munchkin game series – Steve Jackson’s take on classic dungeon crawlers like Dungeons & Dragons without all that roleplaying nonsense – has gotten a makeover by pretty much every major franchise in pop culture, but the best, and most family friendly, has got to be Adventure Time Munchkin. Players select one of the characters from the show to play as and upgrade them with weapons and armor that they win by defeating various villains and monsters from the show – including the dreaded Ice King. It’s positively mathematical! Ages 8+ 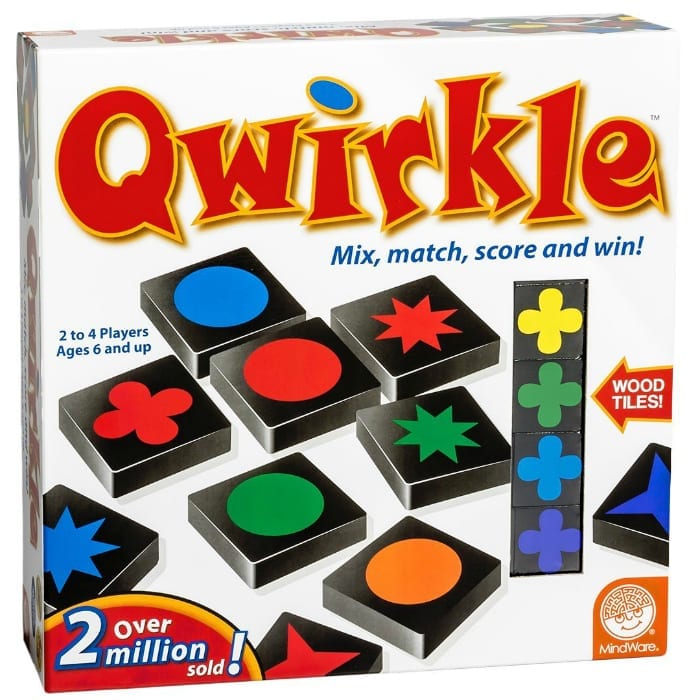 Qwirkle is a color- and shape-matching game that looks simple, but can be a bit of a brain twister for adults just as much as for kids. Despite it’s silly and hard-to-pronounce name, Qwirkle is the kind of game where all you need is a flat surface and some time to spare, and aside from the wooden blocks, there are no other pieces to keep track of. Ages 6+

This is by no means an exhaustive list of all the family friendly games that are out there these days, but it’s a good place to start if you’re looking for something a little more interesting than Monopoly – or after the kids have outgrown that childhood classic that was the bane of my dad’s existence, Hi Ho Cherry-o. So go forth and play games! But don’t be surprised when your kids turn out to be adorable little board game nerds like me.

Thanks for these recommendations! Our family loves Sushi Go!!

Oooohh my poor bank account! We LOVE games in this house and these look fantastic!