148shares
We want to be friends! Join our super cool Facebook group here where we spill all the latest tea, and you know, just have fun. 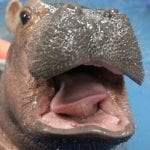 While a lot of you were obsessed about a pregnant giraffe, I’ve been over here following along with the story of Fiona, a baby Nile hippo born around three months premature. Let’s be honest, babies are just about the most globally captivating thing, so I understand the people glued to their screens for a chance to see a giraffe give birth. But what do we love more than that? An underdog story. Seriously, my family and friends will have to fend for themselves because this premature baby hippo is all I care about this summer. 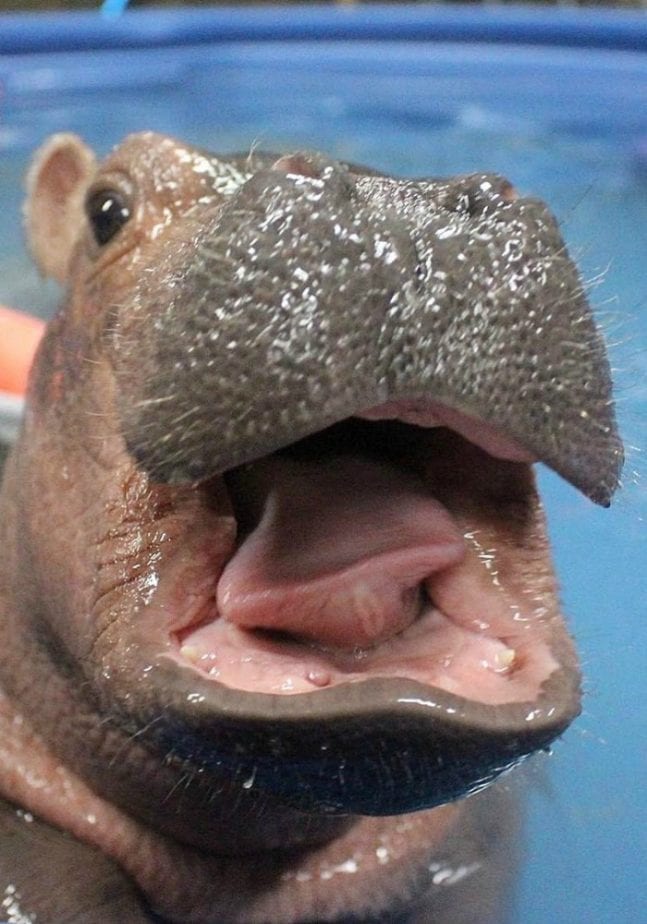 This Premature Baby Hippo Is All I Care About This Summer

Seventeen-year-old hippo Bibi gave birth early this morning to a female calf. The premature calf was not expected until March and is receiving critical care from vet and nursery staff since the baby was not able to stand to nurse from mom. The Zoo will provide updates on the baby’s condition on its website and on Facebook.More information here: http://cincinnatizoo.org/blog/2017/01/24/hippo-baby-arrives-six-weeks-early-cincinnati-zoo-staff-providing-critical-care-for-premature-calf/

Fiona was born to a seventeen year old mamma at the Cincinnati Zoo & Botanical Garden in January. The baby was so weak it couldn’t stand on its own and had to be cared for by zoo medical staff. The videos and pictures of baby Fiona’s milestones and growth have been an unending source of joy. I mean, who doesn’t get a huge case of the warm fuzzies watching a miniature version of one of the world’s deadliest creatures taking their first steps?

Encouraging news from hippo headquarters this morning. Fiona was active during the night and consumed a good amount of formula on her own! This video, taken by her animal care staff during the overnight shift, shows Fiona's first steps! Keep the prayers and positive vibes coming!

I’m to the point where I honestly have alerts set for whenever the Cincinati Zoo posts on Facebook so that I can get Fiona updates as soon as possible. Because she isn’t quite so tiny any more! I mean, she’s gone from the size of my Maine Coon to outweighing me. Check out this fantastic video of Fiona exploring the out door habitat she’ll share with her parents someday.

Fiona is doing well in the outdoor pool but isn’t ready for public viewing just yet. Navigating the deep water takes a lot of energy, so her evening introductions last about an hour. She’s been going out after the Zoo closes with employees and volunteers standing on the other side of the glass to get her used to seeing faces. We will continue to update you daily on her progress.

And her mom? Fiona and Bibi are interacting! As an animal person this has been one of my secret fears, that Fiona’s mother wouldn’t accept this mini-me into their social structure. Zoo updates indicate that mama and baby are getting to know each other and even being friendly. Check out this hippo hello!

This mouth-to-mouth contact may look scary, but it’s actually an interaction that #TeamFiona is happy to see! One of a hippo’s largest features is its mouth. Besides eating, hippos use their mouths to act tough, play, show affection, and explore the world around them. Bibi patiently allows Fiona to explore her mouth just like she would any other new object. Fiona also watches the way Bibi positions her mouth and head for saying hello and copies her like a pro. Fiona has two points of exit when she and Bibi share space.

Now don’t you really want a hippopotamus for Christmas?

It can never be said that NYT & USA Today Bestselling author Sidney Bristol has had a ‘normal’ life. She is a recovering roller derby queen, former missionary, tattoo addict and board game enthusiast. She grew up in a motor-home on the US highways (with an occasional jaunt into Canada and Mexico), traveling the rodeo circuit with her parents. Sidney has lived abroad in both Russia and Thailand, working with children and teenagers. She now lives in Texas where she splits her time between writing, reading and fostering cats.