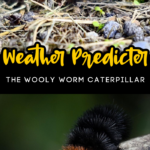 There’s a way to predict how the winter weather is going to turn out, and it might just be the cutest way ever.

We always like to find ways to predict what’s going to happen with the weather, don’t we?

That’s why there’s a market year after year for The Old Farmer’s Almanac. People love their predictions.

We also rely heavily on our weather apps and weather reports. In truth, those are just predictions. I’m sure you’ve noticed that they are never 100% guaranteed.

There is another way, a natural way, to predict the winter weather, and it’s awfully cute.

This is a Wooly Worm — also known as the Wooly Bear — Caterpillar.

[This] caterpillar has 13 distinct segments of either rusty brown or black. Often, it is black on both ends with rust-colored segments in the middle, although it may sometimes be mostly black or mostly rust.

Legend has it that these little boogers can positively predict the winter weather, so we should pay attention!

Now, the Wooly Bear — Or Wooly Worm — is actually the larval form of the Isabella tiger moth, and it is found in northern Mexico and throughout the United States.

This fuzzy worm (which is not a worm at all, but a caterpillar) is “one of the most recognizable caterpillars in North America” due in large part to the fact that it is known to predict the weather.

Apparently, you can tell how mild or harsh the winter is going to be by looking at the color of this caterpillar’s 13 bands.

Now, it’s important to note that Wooly Worms in different locations can differ in appearance. You should always read the worms in your area for the most accurate forecast prediction.

If this little guy is mostly black with only a few rust-colored stripes, it is going to be a harsh winter. The more black you see, the worse the winter is going to be.

When you see a Wooly Worm that is mostly rust colored, you can expect it to be a winter on the milder side.

Sometimes you will come across a Wooly Worm that has more black toward the front of its body, with bands of rust color on its backside. This (supposedly) means that winter is going to begin harsh but end on a more mild note.

If the opposite is true — more rust-colored stripes near the front of the body — the winter will start off on the mild side, but will turn harsh at the end.

Now, the big question — is this a true and accurate way of predicting the forecast?

Every year, the wooly worms do indeed look different—and it depends on their region. So, if you come across a local woolly worm, observe the colors of the bands and what they foretell about your winter weather.

It is important to note, it is ONLY the Wooly Worm — or Wooly Bear — caterpillars that can do the predicting. If you find a blue, yellow, green, or some other color little caterpillar, those are NOT to be used for predicting the weather.

I’d be curious to know if you have had any experience with Wooly Worms predicting the weather were you live. Let us know in the comments.