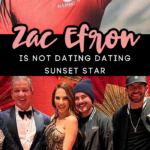 Celebrity couples are always on the watch, but sometimes, there can be some pretty mixed signals…

You may look at this picture and get a bit confused too…Zac Efron seems to be cuddling up to the ‘Selling Sunset’ star, Amanza Smith.

But sources are stressing it pretty hard that the rumors are not true whatsoever and that they just ended up next to each other for the picture. In fact, Amanza is supposedly head over heels for her pro soccer boyfriend that she isn’t ready to reveal!

As for Zac, he was dating Australian, Vanessa Valladares, but is now supposedly single again. So get in line girls!