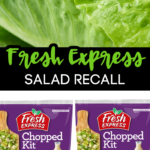 Another day, another food recall.

It’s time to check the fridge again, even though we all recently raided our fridges due to other food related recalls.

This time the recall includes your favorite chopped caesar salads and other lettuce products; 225 salads to be exact.

Fresh Express has issued a voluntary recall of salad products because of the possible contamination of listeria which is a disease-causing bacteria.

The recall lettuce kits packaged in Streamwood, Illinois alarmed by the Michigan Department of Agriculture, found listeria in a random sample test which were distributed throughout the Northeast, Midwest, and parts of Canada.

You can view the entire recall list here and Fresh Express has since halted all production at the Illinois facility.

So before you throw some lettuce in a bowl on Christmas Eve or on Christmas day, make sure to throw out any products immediately that were listed on the recall list.