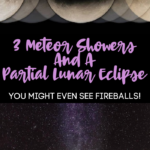 A love a good light show in the sky and November is bringing us 3 to enjoy!

I hope we have clearer skies than we did in October because we were not able to enjoy any of the October meteor showers.

Thankfully with November’s 3 meteor showers, we should have a better chance of seeing shooting stars and possibly fireballs!

Meteor showers are not the only thing happening in the November skies!

The Pleiades star cluster, as well as the Seven Sisters, will also be visible.

These two meteor showers are not super active and you’ll only have the chance to see about 5 meteors each hour, still cool though.

The best time to view the Taurids is after midnight and the entire sky will give you a view of them.

The best part, both are known to feature fireballs and that is something you don’t want to miss.

When the two showers are active simultaneously in late October and early November, there is sometimes a notable increase in the fireball activity.

The reasoning behind this is because we will also have a full moon that will light up the night sky making viewing meteors more difficult.

There will also be a Partial Lunar Eclipse in November

On November 19th we will be able to have the experience of viewing the lunar eclipse.

We haven’t had a lunar eclipse visible for all of North American since January 20th, 2019.

97% of the moon will pass through the shadow cast by Earth, but you’ll need to be up late since it happens in the middle of the night.