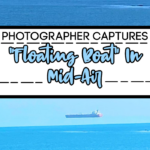 A photographer in England has just gone viral for one very puzzling photo.

Photographer David Morris has captured a ship in mid-air.

Did you read that right? Yes, I said a BOAT, was photographed in “MID-AIR”.

Some say it’s photoshopped, others have said it’s proof that we are living in a simulation and some individuals have even deemed the photo as a “UFO boat”!

What’s even more shocking than the photo is David Morris’ confession that this isn’t the first time he has seen a boat floating in mid-air out in the middle of the ocean, according to ITV.

David Morris has seen something like this before as a photographer because this picture, is a very convincing optical illusion!

The ship looks like it is currently floating in mid-air because of the similar coloring of the sky and sea, according to ITV.

“Superior mirages occur because of the weather condition known as a temperature inversion, where cold air lies close to the sea with warmer air above it,” BBC Meteorologist David Braine said.

“Since cold air is denser than warm air, it bends light towards the eyes of someone standing on the ground or on the coast, changing how a distant object appears,” BBC Meteorologist David Braine said.

Last week, another individual captured a similar photo in Scotland of another ship that also looked like it was floating above the ocean!

So ladies and gentleman, if you happen to see a boat floating mid-air in the middle of ocean, it’s just another every day optical illusion!

127 shares
Sonic Has Created Hard Seltzers That Are Inspired By Their Slushes and Count Me In
← Previous
This Pink Starburst Refresher From Starbucks Is As Tasty As It Is Pretty
Next →
Click here to cancel reply.