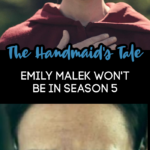 We have finished the storyline of Emily Malek on The Handmaid’s Tale, and we will not see her character return for the 5th season.

Boo. Can we protest? She has been a mainstay of the show since it premiered way back in 2017.

Alexis Bledel has come a long way from playing “Rory,” who we basically saw grow up in Gilmore Girls.

Fans will also recognize her from her appearances in “Mad Men” and her role as Lena in “The Sisterhood of the Traveling Pants” movies.

In fact, I had to do a double take when I saw her appear on the screen during the first season of The Handmaid’s Tale.

She is damn near unrecognizable as the rebellious, against-the-grain Emily Malek, who we have followed since the 1st season of the show.

Emily, who is not a character in the book, has gone from the quiet shopping partner of June, to a rebellious leader of an uprising group within the handmaids, to one of the key players in getting people out of Gilead.

Apart from June, Dr. Emily Malek is definitely one of my favorite characters among the Handmaids. Emily’s story line is one of the most intriguing on the show, IMHO.

If you haven’t gotten caught up on The Handmaid’s Tale, beware. There are definitely spoilers ahead.

Who Is Emily Malek?

Before becoming a handmaid in Gilead, Emily earned her PhD from Harvard and taught microbiology.

Her wife and son were able to escape to Canada when the country split, but Emily was trapped in Gilead.

During the course of the show, Emily has been a handmaid. She has been sexually mutilated for her alternative lifestyle tendencies — which is just about as bad a sin as there is in Gilead. Emily was forced to spend time in the colonies — a type of concentration camp. She escaped to Canada, taking June’s baby with her. And, she became an advocate for refugees — the people who escaped Gilead.

Season 4 — which we saw in June of 2021 — saw Emily, June, and a handful of former handmaids brutally beating Waterford to death.

OMG! If you haven’t seen the season 4 finale, hold on to your seats. It’s intense.

Why Is Alexis Bledel Leaving The Handmaid’s Tale?

After much thought, I felt I had to step away from ‘The Handmaid’s Tale’ at this time — I am forever grateful to (show creator) Bruce Miller for writing such truthful and resonant scenes for Emily, and to Hulu, MGM, the cast and crew for their support.

Basically, we don’t know why she is leaving.

It is not confirmed, but it is possible that Alexis might be leaving Handmaid’s to focus on new opportunities, which MIGHT include showing up in a 3rd installment of The Sisterhood of the Traveling Pants.

“The Sisterhood of the Traveling Pants 3” is supposedly on the horizon, according to what America Ferrera told SiriusXM in November 2021, so perhaps Bledel will be working on that instead.

I will be the first to admit, we are gonna miss the heck out of Alexis’ character. Maybe we will get lucky, and Emily will make an appearance before the series finale.

Speaking of The Handmaid’s Tale finale, it has been rumored that the show will end with season 5.

On one hand, I will be devastated. It is one of my absolute favorite shows.

I’m just not sure where they would take the show at this point, though.

I guess we’ll have to wait and see together.

But, for now, we can say a sad farewell to Emily Malek.