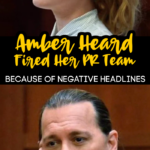 I’m sure a lot of you have been following the Johnny Depp defamation trial against Amber Heard.

Things just are not going well for Amber and honestly, I have not read even one article defending her.

The headlines are bad, so she fired her PR team… Um, Amber… they’re not the problem, it’s you and your actions that caused this.

“she doesn’t like bad headlines,” “frustrated with her story not being told effectively.”

She did hire a new PR team, but I highly doubt they will be able to change the public opinion about her.

Amber Heard is going to be testifying this week and I expect a full-on train wreck watching her try to justify what she has done.

I mean the chick or one of her friends took a poop in their bed according to Johnny Depp, I don’t think any PR firm could spin this into something positive.

There are audio recordings of Amber taunting Johnny about how no one would believe that he was a victim of abuse, she needs help.

Johnny Depp testified that Amber Heard injured him by slicing off one of his fingers when she threw a bottle at him.

Johnny Depp filed the defamation lawsuit against Amber Heard back in 2019 over an op-ed piece she wrote for the Washington Post.

Right now there is a petition to have Amber removed from ‘Aquaman 2’ and the response is insane!

Her testimony is set to start on Wednesday and David Shane, president, and CEO of Shane Communications, is working with her on her PR now, she’s in a deep hole.