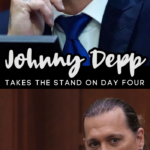 As Johnny Depp continues to fight for his reputation, it’s now day four on the stand in front of the court and judge for Depp.

Cross-examined by Heard’s attorney, Depp was recently asked about audio recordings from previous arguments he had with Heard, asking whether or not she was the only person who had a problem with his alcohol abuse.

Johnny Depp explained that the only person affected by his drinking was himself.

“Sir, if anyone had a problem with my drinking, at any time in my life, it was me,” Depp replied. “The only person I’ve abused in my life is myself.”

Depp will continue to remain on the stand for redirect examination from his attorney, Jessica Meyers.

While the trial started on April 11 and is set to last six weeks, Heard has not yet testified.

Meanwhile, under redirect from his attorney, Depp stated that some of the texts introduced by Heard’s attorney were “irreverent” or based on Monty Python movies.

He noted that he likes to handle difficult or upsetting circumstances with humor.

In an effort to de-escalate disagreements and arguments with his ex-wife Heard, Depp said that he would try to leave the room or even their house.

“No one deserves to live like that,” Depp stated, describing the end of their relationship as “horrific.”