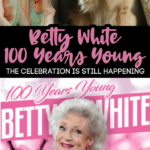 She wanted her fans to celebrate with her in a massive way with a major movie event called ‘Betty White: 100 Years Young – A Birthday Celebration’.

Well, the show must go on, because that is what Betty would have wanted!

This movie follows Betty White in her day to day life, which includes covering her animal advocacy, on set behind the scenes moments, entertaining guests in her home, working with her staff, and even her actual birthday party!

Who doesn’t love a party?!? This one is gonna be GREAT!

Betty White said in a statement to CNN

The movie was made by Steve Boettcher and Mike Trinklein.

Did you know that Betty White was the first woman to receive an Emmy nomination?

How about that she was the first woman to produce a national television show?

Yep, Betty accomplished a lot of firsts as a woman and she definitely deserves to be celebrated for 100 years, even if she did pass away right before it.

Some of my favorite actors and actresses are a part of the movies cast!

There will be clips of Betty White’s roles in the movie, including some of our favorites such as her as Rose on ‘Golden Girls’.

You can get your tickets to the big movie celebration from Fathom Events!

More about actors patting each other on the back I think.