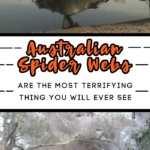 Australian spider webs are NO JOKE, and I hope I never see one in person!

When I think of spiders, I don’t really think of them as having a season — they are kind of just ALWAYS in and around my house.

Australia, though, is its own monster — with its own terrifying spiders — and according to lifehacker.com, there is, indeed, a spider season.

When the weather starts to warm up, and everyone is all ready to go out and play, the spiders start showing up in full force.

That would be the exact time that I got myself OUT of Australia — HELLO, they have the ginormous Huntsman Spiders, which can rival my chihuahua in size!!

Australia is also known for its collection of poisonous spiders that you should avoid like the plague.

But, perhaps the freakiest thing about spider season in Australia are the spider webs.

No, these webs are straight out of a horror movie.

I mean, they ENGULF everything that gets in their path, and I would hate to see the spider that made them!

See, THIS is why I am never going to Australia — I don’t care that I have friends there — I’ll write them letters.

Just check some of these out!! *Shudder*

Sure, they are cool to look at in pictures, but NEVER EVER do I want to see them with my own eyeballs!!

If I do run across one of these monstrous webs, I’m just libel to burn the whole thing down!