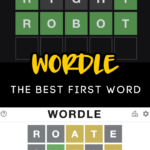 Obsessed doesn’t even cut it. The world is mesmerized by the word game that is Wordle — the daily dose of mental gymnastics we go through to find the correct 5 letter word that is the word of the day.

I haven’t missed a day since I started playing Wordle a week ago. It’s that draw of having to beat the system in 6 guesses or less — it gets me every single time.

If you haven’t yet delved into the world that is Wordle, let me just help you out.

It’s taken the world of social media by storm, infiltrating the minds of modern society with its addictive and outright fun gameplay.

It is a word solving game that takes a basic knowledge of words, sprinkles in a little creativity, logic, and just a bit of luck.

How do you play Wordle?

There is only ONE puzzle to solve each day, so you make the most of what you’ve got — searching the filing cabinet of your brain, bending and twisting the letters into just the word they are looking for.

When you first open up the Wordle webpage, you are greeted with a grid of sorts. There are 5 boxes across and 6 boxes down, with a virtual keyboard hanging out below the puzzle.

The first thing you do is choose a word.

What are the rules? It has to be a five letter word, but it can be ANY five letter word. It could be Favor, Audio, Pound, Media, Point, Alien, Touch — you get the point.

That first word counts as your first guess. You get six guesses in total in order to figure out the “Wordle of the day.” So, you want to make it a good word — I’ll get to that in a minute.

What Do You Do After You Guess Your First Word In Wordle?

After you guess your first word and hit enter, the tiles will “turn” over.

Now, there will be three different colored tiles. Some of them will turn gray, some will turn gold, and the best thing that can happen is for the tiles to turn green.

A gray tile means that the letter you chose is nowhere in the Wordle of the day. It will also be grayed out on the keyboard that is below the grid.

If a tile turns gold, that is a good thing. It means that the letter you guessed is somewhere in the Wordle of the day. But, you have it in the incorrect position.

The color you want to see is green. A green tile means that, not only is the letter you chose correct, it is in the right position for the Wordle of the day.

Then you use a little bit of logic and a whole lot of deduction to figure out the right combination of letters that equals the Wordle of the Day.

How Do You Win At Wordle?

The goal is to get all green tiles. That means you have correctly guessed the Wordle of the Day.

It is a great feeling to see all those tiles turn to green!

Is there a best first word to guess everyday in Wordle?

Well, that depends who you ask. The word is completely random, so sometimes a first guess will get you lots of green tiles. Then there are other times when your first guess may get you one or two gold or green tiles.

I hate those days.

There are a few theories for first words that may help you along in your quest to beat the game and come out a victor.

To maximize the value of your opening gambit, choose a word with three vowels and five different letters. Some examples: orate, media, radio.

Roate — This word was found to be the “best” first word by expert programmer and game designer, Tyler Glaiel. He used a bot to play the game until it came up with the best first word. And, that word was ROATE. It happens to be the first word I use every single day, and it hasn’t failed me yet.

Adieu — Many Wordle game players like to start with the word ADIEU. It is heavy on the vowels, so you are pretty much guaranteed at least one right letter guess in the first word. HOWEVER, unless your consonant ends up being “D,” you are going to be stuck trying to fit consonant tiles into your subsequent guesses.

Store — Another good starting word might be STORE. It uses the three most commonly used consonants in the English language, as well as two vowels. If you don’t get some positive results from that, you are having an extremely unlucky day.

There you have it. Three words to start off your quest for the correct Wordle of the day. Try them out, and see if they work for you.