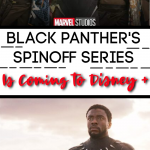 Marvel’s Black Panther spinoff series ‘Kingdom of Wakanda’ is coming to the big screen and when I see “big screen” I mean flat screen.

Black Panther: Kingdom of Wakanda spinoff series is coming to the flat screen in your living because Disney + is welcoming the movie series with open arms.

“It’s an honor to be partnering with The Walt Disney Company. Working with them on Black Panther was a dream come true. As avid consumers of television, we couldn’t be happier to be launching our television business with Bob Iger, Dana Walden and all the amazing studios under the Disney umbrella, said Ryan Coogler in a statement.”

Ryan Coogler, who is the director of Black Panther I and II is attached to the Wakanda series, as part of the five-year deal between his Proximity Media company and Disney.

Keep in mind that Black Panther II is hitting theaters on July 8th, 2022, but who could really forget this date?

Disney Executive Chairman Bob Iger expressed his thoughts on the green light Disney+ has given to Black Panther’s spinoff series.

“Ryan Coogler is a singular storyteller whose vision and range have made him one of the standout filmmakers of his generation. With Black Panther, Ryan brought a groundbreaking story and iconic characters to life in a real, meaningful and memorable way, creating a watershed cultural moment. We’re thrilled to strengthen our relationship and look forward to telling more great stories with Ryan and his team, he said in his own statement.”