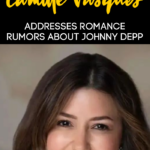 Camille Vasquez, Johnny Depp’s amazing kickass lawyer has a ton of attention on her still.

The woman is the definition of badass and even got a huge promotion after the trial for the hard work she did during the trial between Johnny Depp and Amber Heard.

Apparently, people don’t realize that men and women can work together without there being any funny business happening.

Well, Camille Vasquez is over it and she had some things to say about those rumors during an interview with People.

It’s super disrespectful to everyone involved, including her boyfriend, whom she is “very happy” with.

It’s sexist. It’s unfortunate and it’s disappointing, but at the same time it kind of comes with the territory. I can’t say I was all that surprised.

She’s right, it is sexist… I also think it’s jealousy over seeing a strong woman do an amazing job while under the spotlight.

I care very deeply about my clients, and we have obviously become close. But when I say we, I mean the entire team, and of course that includes Johnny. And, I’m Cuban and Colombian. I’m tactile. What do you want me to say? I hug everyone. And I’m not ashamed about that.

Geesh, they went through a lot together, an emotional ride… the lady hugged her client… they were celebrating a victory!

This man was fighting for his life and it broke my heart to see him day in and day out have to sit there and listen to the most horrific allegations being made against him. And if I could provide any bit of comfort, then of course I would do that, whether it’s holding his hand or letting him know that we were there and we were gong to fight for him because he deserved it.

Seriously, stop being jealous and go out and do something badass!