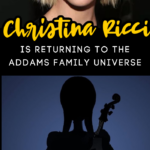 Not only is there going to be a new Addams Family universe show, Wednesday, on Netflix, but Christina Ricci is going to have a “major part.”

The live-action Addams Family spinoff is going to be directed by Tim Burton. I mean, that’s reason enough to watch it right there!

But, it’s going to have the OG (movie) Wednesday Addams, Christina Ricci, as one of the characters.

Okay, I must see this show NOW.

The coming-of-age comedy, written by Smallville creators Al Gough and Miles Millar and directed by Burton, stars Ortega as Wednesday Addams during her years at Nevermore Academy. It’s described as a sleuthing, supernaturally infused mystery.

Now, Ricci won’t be playing Wednesday Addams in this spinoff — but, never fear, she will be included in the cast. AND, she is being called a series regular!

Christina Ricci Is Going To Be A Regular On The Netflix Series, Wednesday.

Not much is known about Christina’s new role amongst The Addams Family universe. The creators are wanting to keep that a surprise for the show.

Ricci is playing a new character, who is similar to the one originally played by [Thora] Birch and will replace it on the show.

We do know that Wednesday is going to be an 8-episode series, and it is a Netflix Original.

Wednesday’s attempts to master her emerging psychic ability, thwart a monstrous killing spree that has terrorized the local town and solve the supernatural mystery that embroiled her parents 25 years ago — all while navigating her new and very tangled relationships at Nevermore.

Wednesday will be premiering on Netflix in 2022. We don’t have an exact date yet, but you know we will let you know as soon as a date is announced.

Side Note: MAN!! Netflix is KILLING IT with their original content!! I haven’t seen a bad film or series that they have put out!!