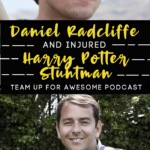 Hey all you Potterheads?

I was today old when I learned that Daniel Radcliffe’s stunt double — for ALL eight Harry Potter movies — was seriously injured while rehearsing one of the stunts for Harry Potter and the Deathly Hallows.

At the age of 25 David (Holmes) was left paralysed after an accident on set whilst rehearsing a stunt.

David Holmes was hurt so badly during rehearsal for a “jerk back” stunt that he broke his neck, and was paralyzed from the chest down.

Daniel and David have remained in touch over the years — can you believe it’s been nearly TWELVE years since the last HP movie — and they even do a podcast together.

Unfortunately, when David was injured, it immediately derailed his career as a stuntman, but he never lost his love for the profession that changed his life forever.

Daniel and David have teamed up for a podcast called Cunning Stunts, where they interview stunt performers from around the world, discussing some of the coolest and most memorable stunts in all of film.

What I missed from my days at work, as much as doing the stunts and getting that buzz, was the conversations and stories that me and the stunt boys used to share. You realize the whole community is built up of so many memories and so many characters.

So, you might be wondering why the heck Daniel Radcliffe is part of this podcast.

Well, not only are David and Daniel friends, but Daniel really enjoys hearing all the stories of the stunts — I mean, who wouldn’t, right?!?

The conversations (on the podcast) are frank and funny, as well as honest about the risks inherent with the job, and the work stunt teams put in to mitigating that risk.

If you want to give the podcast a listen, you can go to the Ripple Productions website, and check it out.