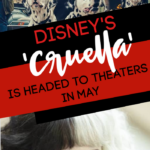 Disney, you slay me!!! This looks HELLA good, and I can’t wait!

Disney found wild success when they told the backstory of — quite possibly most famous Disney villain — Maleficent.

I mean, it was Fan-Freaking-Tastic, was it not?!?

NOW, Disney is delving into the story of another iconic Disney villain, Cruella de Vil — that black and white devious character from Disney’s 101 Dalmations.

Cruella, the name of the story AND the main character, is going to be played by, Academy Award Winner, Emma Stone.

And, get this, the story is going to take place in the midst of the 1970s punk scene. HOW COOL IS THAT?!?

Cruella is going to be directed by Craig Gillespie. You know him as the director of I, Tonya, the film that garnered Allison Janney an Oscar for best supporting actress.

Glenn Close, who played Cruella de Vil in Disney’s 1996 live-action remake of “One Hundred and One Dalmatians,” serves as an executive producer on “Cruella.”

The film is set to drop in theaters on May 28th, but we all know how things have gone since this dadgum pandemic struck.

There is always the possibility that the release date for Cruella will change, so watch out!

See the AWESOME trailer for Cruella below.