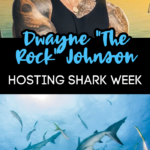 It’s one of the most anticipated weeks of the year for badass television.

Shark Week is almost upon us.

And this year, not only do we get sharks, we get a bit of muscle to go along with it.

According to CNN, Dwayne (The Rock) Johnson is going to be the first ever Master of Ceremonies.

I can’t think of a better person to head up Shark Week than Maui himself!!

Mr. Johnson will be coming to us directly from his home state of Hawaii — absolutely breathtaking.

The Rock took to instagram to announce the news.

As Master of Ceremonies for this weekend’s SHARK WEEK 🦈 I brought @discovery & our @sevenbucksprod to my home of HAWAII to shoot. A LOT of hard work from sun up to sun down, but we all fun and laughed along the way. Was happy to invest our Polynesian culture into SHARK WEEK — as we consider sharks our Aumakua. Gods.

Dwayne Johnson will be joined by a stellar bunch of friends for this week dedicated to the shark.

Mark Rober and Noah Schnapp (Stranger Things), the cast of Jackass, and Tracy Morgan are going to be tagging along for the fun.

Check out this lineup for this year’s Shark Week.