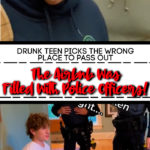 So, I did a lot of dumb stuff when I was younger, but I never wandered into a home that was not mine to pass out.

This could have ended very badly, thankfully the teen passed out in an Airbnb that had been rented out by police officers and they handled it well.

Imagine if he had wandered into a home where someone had considered him a threat, it could have ended very badly.

These police officers handled it great and no one was hurt and they even had a pretty good laugh about the entire situation.

The three sheriff’s deputies from Montana had rented an Airbnb in Milwaukee for a training session in Wisconsin.

They woke up to an open door and a stranger sleeping in the house, they had all got in at different times and thought the noises were just each one coming home.

Dude broke into the house in the middle of the night.

Quote from officer on the TikTok video

While the stranger was passed out, they safely handcuffed him and waited for the local police to arrive.

They made a TikTok that went viral pretty quickly, in my opinion, the kid is lucky that they were the ones that found him.

Had he been caught coming into most homes, he may have been hurt or even killed.

Everyone was in good spirits, even the handcuffed teen, they didn’t press charges by the way… and I think he learned a good lesson that morning!

You can watch the TikTok from Sheriffk9misty here.