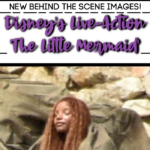 I know there is a ton of excitement for the new live-action ‘The Little Mermaid’ film.

The movie is the latest live-action remake of a popular Disney film, the others being ‘Cinderella’, ‘Aladdin’, ‘The Lion King’, ‘Beauty and the Beast’, and ‘Mulan’.

Halle Bailey, star of ‘Grown-ish’ and an amazing singer was a shoe-in for the role of Ariel!

I think the casting choices are phenomenal!

Right now they are in the middle of production of ‘The Little Mermaid’ in Sardinia, Italy!

There have been a ton of delays with the film due to the coronavirus pandemic and things are a bit behind, but the show goes on!

There are some photos that were taken that show Bailey wearing some of the distinct looks of Ariel.

Just Jared revealed the photos on Twitter and they show Bailey wearing the burlap dress as Ariel, you can also see that Bailey’s hair is a gorgeous shade of red and done in beautiful braids!

The live-action film will have a bit different storyline than the original 1989 movie, but it seems that there shouldn’t be any major changes.

I’m holding on to faith that they will not stray too far from the original because that was perfection!