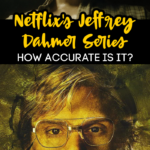 Have you started watching ‘ Monster: The Jeffrey Dahmer Story’ on Netflix?

I am currently in the process of watching the limited series on Netflix, but one thing I have noticed is that the show is not glorifying the nasty acts of Jeffrey Dahmer.

So many shows and documentaries that I’ve watched almost seem to try to romanticize these types of crimes, and honestly, it’s just gross.

So far in watching ‘Monster: The Jeffrey Dahmer Story’ I have noticed that it seems more factually accurate than others.

You feel more of a connection with the victims than you do Jeffrey and that’s how it should be.

Look, I am obsessed with reading books as well as watching movies and documentaries about serial killers… and just killers in general.

It’s not because I am obsessed with the action, but what makes them tick and actually do the horrendous things they do.

This series seems to highlight how sick and disturbed Jeffrey was and how he could have been stopped many times, but due to the media and failed police interactions… he was walking free amongst us.

Many of the things portrayed in the series is true. Such as, the neighbor calling police to tell of an odor or hearing people and those calls were ignored.

Others facts like two officers — John Balcerzak and Joseph T. Gabrish, bringing one of Dahmer’s 14-year-old victims, Konerak Sinthasomphone, back to the apartment that would ultimately become the site of his death.

Now, this doesn’t mean that this series is 100% factual… no not at all, liberties were indeed taken, but none that really change who Jeffrey Dahmer was or the inexcusable crimes he committed.

It was only little things in the series that were changed, such as Jeffrey drinking a bag of blood from the plasma center he worked at when it was actually a vial that he said he spit out because he didn’t like the taste.

Or the order in which his death happened when he was deservedly (my opinion) beaten to death by another inmate named Christopher Scarver.

So far though, Netflix seems to have done a brilliant job on this one and if you haven’t watched it, you really should!