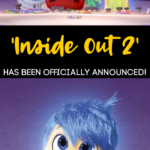 Dude, talk about an emotional rollercoaster!

That being said, I am so happy to be able to tell you that it was announced today at d23 that there will be an ‘Inside Out 2’!

‘Inside Out’ was released in theaters in 2015, and we are overdue for a follow-up, I need to know what’s happening to my girl Riley!

I really had a hard time not hating Sadness… I know, I know… it’s just an animated movie but she sure was screwing things up!

Riley is a full blown teenager now, so I can imagine how those emotions are going to be acting up in ‘Inside Out 2’.

We will see Joy, Sadness, Anger, Fear, and Disgust once again as Riley navigates being a teenager.

The sequel is written by Meg Lafauve and will be directed by Kelsey Mann.

As of right now, we do know that Amy Poehler is returning as Joy, and ‘Inside Out 2’ will be coming in the summer of 2024!

No other information is available at this time, but we will post as we learn more… ahhh I can’t wait!